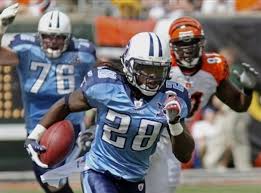 That blur speeding away from opposing defenses and running off with The Associated Press 2009 NFL Offensive Player of the Year award is Tennessee Titans running back Chris Johnson.

Considered the fastest man in pro football, Johnson was uncatchable in setting a league mark for yards from scrimmage (2,509) and becoming the sixth player with a 2,000-yard rushing season.

“I kind of realize what I did and I feel like I had a dream season,” said Johnson, who scored 16 touchdowns (14 rushing), second to Minnesota’s Adrian Peterson, and tied the NFL mark with six consecutive games rushing for at least 125 yards.

Johnson, who has run a 4.2 in the 40 and believes he’ll remain the NFL’s fastest player unless a team signs Usain Bolt, has bigger dreams, too: breaking Eric Dickerson’s single-season rushing record of 2,105 yards, and winning the league MVP award.

“I didn’t even get one vote at all [for MVP],” Johnson said. “Like the season I had, it seemed like, `What more do they want me to do?’ That just felt like rookie of the year; it’s a quarterback thing I guess.”

Of course, if Johnson keeps posting phenomenal numbers, all kinds of honors and records should keep coming.

“That gives me something to look forward to next year,” he said before focusing on Dickerson’s mark. “You go for 2,000 yards. I don’t know what you can really say that makes you want to work harder or anything like that, so it’s kind of a good thing and a bad thing me not getting the record.”

Johnson’s production was even more impressive considering the Titans began the season with six straight losses. He was a key reason for Tennessee’s turnaround to 8-8.

Johnson became the first player to run for three TDs of 85 yards or longer in a season; no NFL player had even done that in a career. He’ll start next season with a streak of 11 100-yard rushing games; Barry Sanders holds the record with 14 in 1997.

In November, Johnson rushed for 800 yards, the best month of any running back in NFL history. By then, it was a one-man show in the Tennessee backfield; as a rookie, Johnson split duties with LenDale White, and rushed for 1,228 yards and nine TDs. This season, White got only 64 carries a year after running for 15 touchdowns in 2008.

“I took a backseat to greatness,” White noted.

“I’m just happy to be a part of it, to make history with him,” Titans quarterback Vince Young added. “He’s going to be a great player. This is just his second year, that’s the crazy part.”

No one has rushed for 2,000 yards twice in a career. Titans coach Jeff Fisher says it would be unwise to bet against Johnson setting that precedent, too.

“I think he’s one player that has a chance to do it again. He’s young,” Fisher said. “He’s special. He has the potential to go the distance and change games and do those kinds of things.”

Johnson is the first Titan to win the honor, but the third player in franchise history. Quarterback Warren Moon won in 1990 as a Houston Oiler, and Earl Campbell took the award from 1978 to 1980 with the Oilers.