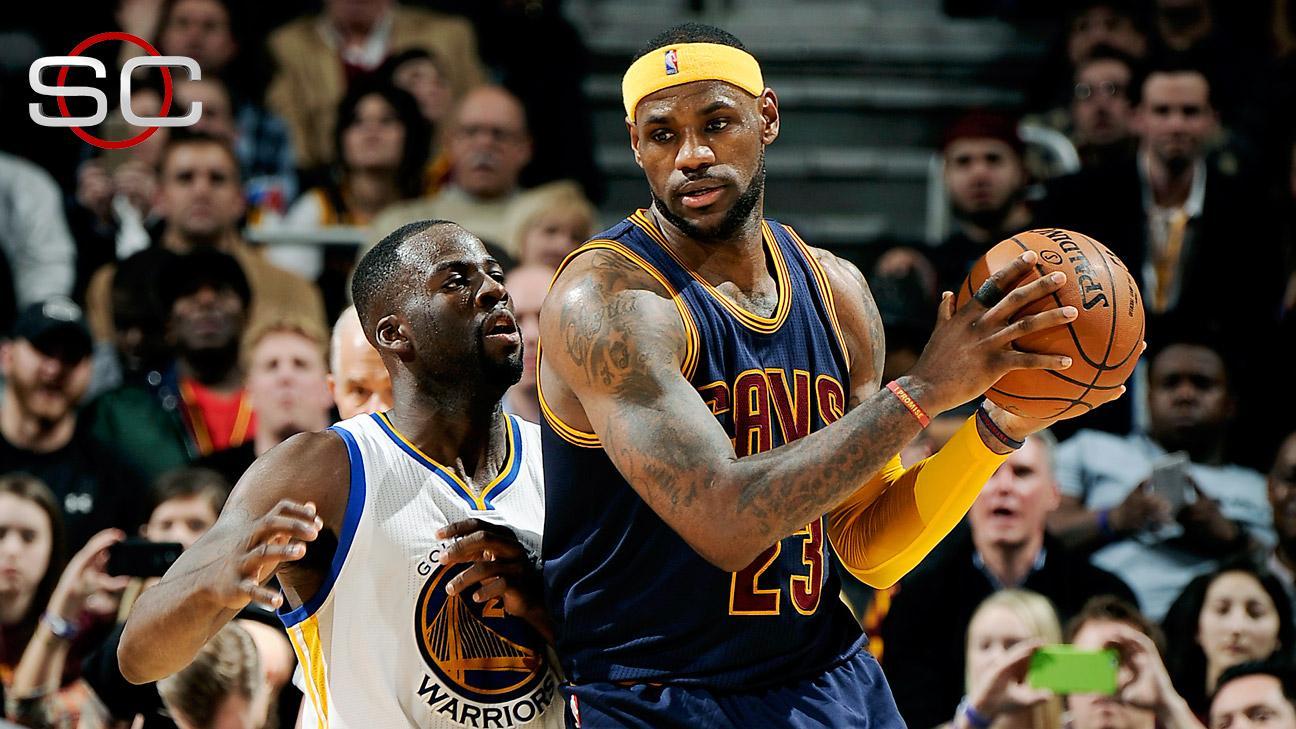 LeBron Scores 42 In Win Over Warriors

CLEVELAND — LeBron James says he isn’t about personal statements. He made one anyway Thursday night.

James scored a season-high 42 points, and the Cleveland Cavaliers beat the Golden State Warriors 110-99 for their 18th victory in 20 games.

In beating the Warriors, the Cavs looked like a group aiming to prove that you better not judge them yet, because they plan on getting even better, Dave McMenamin writes. Story

While LeBron ruled the battle of MVP candidates over Stephen Curry, a more worrisome concern is emerging for the Warriors, Ethan Sherwood Strauss writes. Story

ESPN Stats & Info reviews everything you need to know about LeBron James’ big night, including what he did that hadn’t happened since 1995. Story

James downplayed any talk that the performance might put him in the lead for MVP consideration.

The Cavaliers did get a bit of bad news. All-Star guard Kyrie Irving, who scored 24 points, injured his left shoulder and didn’t travel with the team to Indiana for Friday night’s game. A team spokesman said Irving will have an MRI on Friday and is doubtful against the Pacers.

Irving left the game in the third quarter and went to the locker room but returned early in the fourth.

Curry scored 18 points but had only six after the first quarter and was 5-of-17 from the field.

“I hope it’s not handed out on this one game,” Curry said of the MVP talk. “I hope it’s about the body of work. Tonight just wasn’t my best game. Shots that I normally make didn’t fall tonight.”

James was out with knee and back injuries when the teams met Jan. 9, a 112-94 win for Golden State. Although the four-time MVP hit 15 of 25 from the field Thursday, the back apparently is still an issue. James stretched out on the floor instead of sitting on the bench when he had a rest in the fourth quarter.

“It tightened up a little bit,” James said. “It’s a little tight right now. I’ll get some treatment tonight and some more tomorrow.”

Added Cavs coach David Blatt: “If he plays like that with a sore back, imagine how well he’ll play when he doesn’t have a sore back.”

If the matchup between the team with the best record and the hottest team in the league was a preview of the NBA Finals, the advantage went to the Cavaliers.

Cleveland, leading 61-56 at halftime, took control in the third quarter. James scored 12 points, including two 3-pointers, and found Timofey Mozgov for an open jumper to push the lead to 86-70.

“We’re not going to win every game,” Warriors coach Steve Kerr said. “This is the NBA. I don’t look at this like a plague or anything. It’s just part of the grind of the season.”

Kerr was given a technical foul in the second quarter and had to be separated from official Bennett Salvatore after Draymond Green was assessed a technical in the third.

The game was tied eight times and featured 12 lead changes in the first half. James scored 13 points in the first quarter and finished the half with 24. Curry made three 3-pointers in the opening period.

Curry missed Sunday’s game at Indiana with a sore right foot but returned to score 32 points Tuesday at Washington.

Green added 16 points for Golden State, but Klay Thompson was held to 13 on 5-of-13 shooting from the field.

Center Kendrick Perkins, signed by Cleveland on Tuesday, entered the game midway through the second quarter and received a loud ovation in his home debut. He committed two fouls in 2:13 and was pulled.

Warriors: Golden State has three more stops on its season-high, six-game trip. … Kerr picked up his eighth technical of the season, tying him for second in the league among coaches. … Kerr said he likely will rest C Andrew Bogut and F Andre Iguodala at some point during this trip.

Cavaliers: Perkins committed two fouls in 2:10 in his first game against Detroit. … Cleveland plays eight of its next 10 on the road, a challenging stretch that includes games at Houston, Toronto, Dallas, San Antonio and Miami. … F Shawn Marion (strained left hip) missed his fourth straight game.

Hall of Famer Magic Johnson tweeted that the Cavaliers would “definitely” be in the NBA Finals. James isn’t ready to make that proclamation. “It means nothing, really,” he said. “As a team, we have to go out and play. Words can only take you so far, no matter who they come from.”

Kerr said there were no hard feelings between himself and Salvatore over their third-quarter exchange.

Warriors: At Toronto on Friday.

Cavaliers: At Indiana on Friday.

Copyright by STATS LLC and The Associated Press