Transportation Security Administration officer has been reassigned after Sunday’s security breach at Newark’s Liberty International Airport, according to the TSA

“The TSA is reviewing the circumstances surrounding the incident, and we are making an assessment as to what disciplinary action will be taken against [the] officer posted at the exit in question,” TSA spokeswoman Ann Davis said. “For now, that officer is performing non-screening duties while we look at what happened.”

Davis confirmed Monday that the TSA had not been able to locate the individual who breached security, but there was no indication that the individual presented a serious threat, she said.

“We were able to eliminate that he was a risk to the airport by rescreening everyone and re-combing the airport to make sure he didn’t introduce anything to the environment or hand anything off to anyone,” she said.

The incident Sunday evening forced the closure of a terminal for hours while authorities rescreened thousands of passengers. 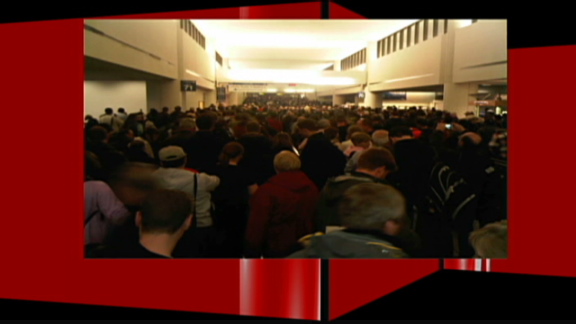 The security breach happened about 5:20 p.m. at Terminal C when a man walked through an exit on the public side to the secure “sterile” side for passengers who had cleared screening, according to the TSA.

All passengers had been rescreened by early Monday, according to the TSA. Flights from Terminal C were grounded until the process was completed.

Authorities reviewed video from airport cameras but were not sure whether the man was once on the sterile side and went back or whether he never went through screening, Davis said.

The incident caused arrival delays and mainly affected Continental Airlines, which is the airport’s largest tenant.

Newark Liberty International Airport, about 15 miles from Manhattan, is the second-largest hub for Continental.