2018 Jeep Wrangler Rubicon Alaska Cannonball | 14,000 miles to Deadhorse and back

I’ve never delayed big adventure long enough to fill a bucket. But I do have a bucket item that dates to 1992: drive from Deadhorse, Alaska, to Tierra del Fuego, Argentina. Twenty-six years later, it’s time. But first, I needed a vehicle. And a Jeep Wrangler was not my first choice.

Growing up as a kid in the Midwest, I loved Jeeps. But around 10 years ago I went on a camping trip to Death Valley with a colleague, testing the early JK Wrangler against the competition. By the end of it, I couldn’t justify the ergonomic and physical punishment for the admittedly massive capability. So two years ago, I bought a 1994 Toyota Land Cruiser project truck to make the journey. I paid too much, and the Cruiser revealed itself to be not a garage project, but the Manhattan Project. I took this as a good omen. Adventure begins in the deep end, so why wait to get there?

During a break from discovering enough gremlins to reboot the movie franchise, I had dinner with Jeep’s West Coast PR guy. I mentioned my plans for a six-month overlanding trek to Alaska. He said, “You know, we’ve got a new Wrangler coming out — that might be a good test of the chassis.” My outside voice said, “That would be interesting.” My inside voice said, “Hmmm.” Anything’s possible after 10 years, right? I might like it. Might.

Many plans have gone awry on the way to this moment. It’s taken more than a year to lock in a start date, because Jeep couldn’t spare a Wrangler Rubicon. Everyone else in America keeps buying them. A suitable Wrangler was found eventually, but now the deed had to be done in three months, not six. What was going to be a comfortably-paced, backwoods roll up to Alaska and back has turned into the Rubicon Overland Cannonball.

I know 14 weeks is plenty of time to drive to the Arctic and back. (Tierra del Fuego is officially off the itinerary.) However, the point of this trip is to fit in as much dirt, as many bucket-list trails, and all the wild America possible. That means my route’s about 14,000 convoluted miles of criss-crossing the country in all the cardinal directions. And that’s assuming everything goes to plan.

Until last week, I was doing this trip with a friend from college who lives in Marietta, Georgia. He was the photo/video guy. Then he had a medical emergency, so the only trip he’s taking is to the OR and rehab. Now I’m going by myself, and I think it’s important to point out that I have no idea what I’m doing. That isn’t modesty, that’s truth: zero clue. I’ve done plenty of off-roading and camping. I’ve only been overlanding once, four years ago, and I’ve never been in charge of an overlanding expedition. 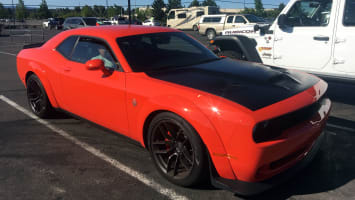 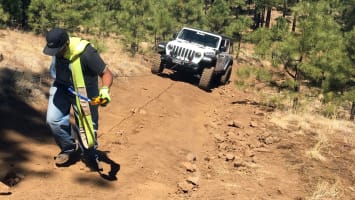 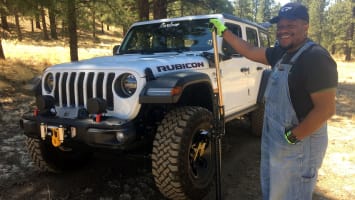 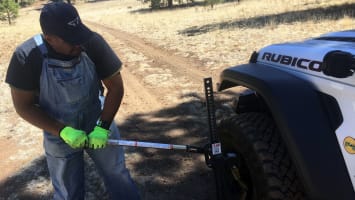 So I hopped into a Challenger Hellcat and zipped from Los Angeles to Flagstaff, Arizona. There, the fabulous Nena Barlowe, who runs off-road tours with her company Barlow Adventures, took me into the high mountains in her JL Wrangler, Juliet, for a full day’s instruction. She taught me how to use a Hi-Lift jack and a winch without killing myself, how to splice winch cable, how to tie knots and make a dogbone, how to keep my Jeep from sliding sideways downhill during a recovery, and how to avoid The Kill Zone. When we weren’t on the mountain, she showed me what to buy and how to pack. Then she sent me goods and made introductions.

The first leg is a wholly highway run from Los Angeles to Georgia, for two reasons. One, since the trip’s cut in half, I couldn’t lollygag in California fettling details. Almost all of the equipment I ordered I sent to my pal in Marietta, figuring we could throw everything in the back and sort out the particulars on the trail. That makes my first order of business getting my stuff.

Two, I want to visit the vintage Jeep museum that Rugged Ridge maintains in Suwanee, Georgia. An afternoon of perusing how the Jeep legend began will mark the official kickoff for this boondoggle.

My next stop will be Cape Hatteras, North Carolina to join the head of the Trans-America trail, the first bucket list route on the list. Once I land in the Outer Banks, that will mark one week and 2,800 miles done and dusted.

I’ll follow all 5,184 miles of the Trans-America Trail from Cape Hatteras to Port Orford, Oregon, then turn right and head up the coast to Seattle. After a brief recoup-and-regroup on the shores of the Sound, I’m looking at 2,639 highway miles to Deadhorse, Alaska — the last 500 of which constitute the Dalton Highway, another bucket-list stretch of gravel. I’ll spend a couple of days on a gander around the Arctic oil exploration outpost, with the obligatory toe dip in Prudhoe Bay.

This is where things get fuzzy, because I have no idea if everything will have gone to picturesque plan by then. Assuming it does, I’ll reach Deadhorse in late August, about a month after departure.

The plan as of now is to backtrack down the Dalton Highway, through Fairbanks and Denali National Park to the southern Alaskan coast, the city of Seward and Kenai Fjords National Park. Then a northwest diagonal through Tok, Alaska, on the way to Dawson, Yukon Territory, Canada via the world’s northernmost border crossing on the Top of the World Highway.

From Dawson, I’ll head south through Whitehorse and into British Columbia. This is where I begin testing the Jeep and open the overlanding account. Teeth get cut on the 43-mile North Copper Mine Logging Road in British Columbia. After that, if weather conditions — and my condition — allow, I’ll tackle the Alexander MacKenzie Trail, a seven-day, 237-mile stretch of forest and marsh from Quesnel to Bella Coola, B.C. Assuming success, I’ll hop over to Lake Louise in Alberta for pristine R&R, then haul the show back to the States.

In Montana, I’ll travel the Magruder Road Corridor from Darby, Montana, to the Red River Ranger Station in Idaho — named after the unfortunate Lloyd Magruder, murdered along this route. Trivia time: The hanging of the murderers was the first legal execution in Idaho Territory. Then I’ll hook up with the Continental Divide Trail, an off-road route running from the Canadian border to the Mexican border, and use that as my main highway between hardcore side excursions.

I don’t know what those hardcore excursions will be yet. The Morrison Jeep Trail in Cody, Wyoming? The Alpine Loop in Colorado? Jeep-town USA: Moab, Utah? With so many weeks and so much trail between here and there, I have plenty of time to gameplan. First, though, I have to get to Darby, Montana, in one piece, with a Jeep that is also, hopefully, in one piece.

As of writing, this is where we stand: I picked up a 2018 Billet Silver Jeep Wrangler Rubicon with a soft top at LAX on Sunday, July 22. Completely stock suspension, 33-inch tires, 3.6-liter V6 under the hood, eight-speed automatic. Jeep fitted Mopar’s five-inch LED lights, a Warn winch, Mopar HD rock rails, a cargo mat, and molle bags. It had a full tank of gas and 9,035 miles on the odometer. When I’m finished checking lists and packing items, I leave for Georgia early Wednesday morning, July 25. I’ll be back in early November, Spartan-style: either with my Jeep, or on it.

I’m covering the entire thing in words, pictures, and video. If you have advice on places to see or avoid, things to do, or just how to avoid becoming Naked and Afraid on the Whipsaw Forest Trail, leave your comments below, on any of Autoblog‘s social media channels, or send word directly to jrrtries@outlook.com.

Before I go, I want to thank a few folks for invaluable advice, gear, and other contributions that I’ll cover along the way: Scott B. and Trevor D. at Jeep; Nena Barlowe (again); Chris Collard of Adventure Architects and editor-at-large at Overland Journal; Sean Holman at Truck Trend; Kevin and the multi-tool maestros at Leatherman; Justin and the recovery experts at Factor55; Henk, Dave, and the all-Jeep-all-the-time gearheads at Rugged Ridge; wise words from Scott Frary at ARB; and Pam R. at Shell, because overlanding doesn’t go too far over land without gas.

With that done, come hell or high water — and I expect both — this will be an awesome ride. Stay tuned.