PALM SPRINGS, Calif. — The Lamborghini Urus is a strange beast. It’s generally shaped like a modern Lamborghini, a thick wedge with knife-edged angles, but its four-door form brings a practicality that no previous Lamborghini could match. Not even the iconic LM002, a thinly veneered military vehicle more similar to the classic Steyr-Daimler-Puch Geländewagen than the Urus, which is a crossover and fundamentally meant to appeal to a much broader audience.

We flew to California at the height of snowbird season to drive this $ 200,000 SUV. We wanted to focus on the wonderful weather and Urus’ abilities on the track rather than debating whether or not it truly is a product of Sant’Agata Bolognese. Models like this attract new customers to the brand, and the company expects the Urus to double sales. To succeed, it needs to have the sex appeal and performance to back up the Lamborghini name, not necessarily be a direct link to the Huracan or Avendator.

There’s a Volkswagen Group feel to the whole design, discernable even under the camouflage of hexagonal shapes. That’s no surprise, as the Urus rides on the same platform as the Audi Q8, Bentley Bentayga and Porsche Cayenne. The hardpoints can’t change, and the sharp lines remind you more than a little of the Q8. And the 4.0-liter twin-turbo V8’s exhaust note betrays the Urus’ German roots, too. The engine – again shared with other VW products – sounds beefy and mean, but doesn’t sing quite the same sweet tune you expect from an Italian performance car, especially when your foot is nailed to the floor.

The Urus’ interior, too, has a distinct Audi aura. The leather is fantastic, especially in saddle brown like our main test vehicle, but the digital instrument cluster is lifted straight from Audi, as are the steering wheel, window and lock switches, infotainment system and more. It’s mostly quality stuff, but it feels like pieces from a parts-bin when some of the touch points on a $ 200,000 SUV are the same as a $ 35,000 sedan. It’s also a problem that the Porsche Cayenne and Bentley Bentayga don’t have. The things Porsche and Bentley could change — gauges, switches, lock buttons and more — they did change. Those two feel like more distinct products and less like a different wrapper on the same candy bar. It feels like Lamborghini skimped on some of the details. Look, Audi makes great stuff, but it makes the Urus feel less special. 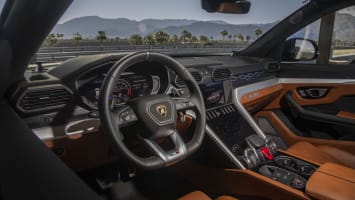 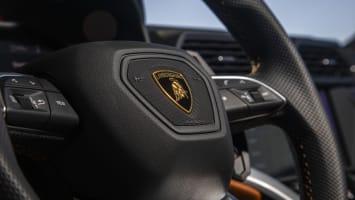 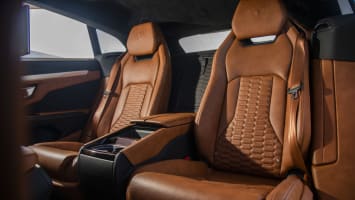 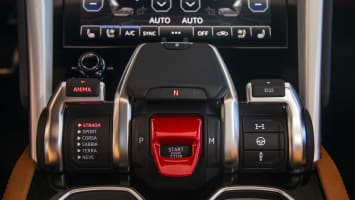 But on the track, you move the Urus around like you’re swinging a sledgehammer. At 4,843 pounds, it’s big and heavy, sure, but the all-wheel-drive system makes it easy to put each and every one of its 641 horsepower and 627 pound-feet of torque to the ground. It hits 60 mph in about 3.5 seconds, topping out at 190 mph. The Urus has a standard 40/60 front to rear torque split, though up to 80 percent can be sent to the rear or 50 percent to the front as needed. Be thankful at the end of the straight that the 10-piston fixed calipers are clamping down on the serving platter-sized 17.3-inch carbon-ceramic rotors. Lamborghini says these are the largest ever fitted to a production car.

The Urus is surprisingly nimble in corners, too, thanks to the all-wheel-drive system, the adaptive air suspension and a whole lot of computer wizardry. Six different drive modes – Strada, Sport, Corsa and Neve (snow) for the road and Terra and Sabbia (sand) for the dirt – are all selectable with the ANIMA switch to the left of the shifter. They adjust the steering, suspension, traction/stability control, shifts, exhaust and throttle sensitivity. The EGO switch to the right of the shifter puts the Urus in a custom combination of the driver’s choosing. Both switches look and feel nice, but there’s no going back if you go one mode too far in with the ANIMA. You either have to cycle back through the modes or hold it down for a few seconds to get it to reset. It’s small but annoying nonetheless. 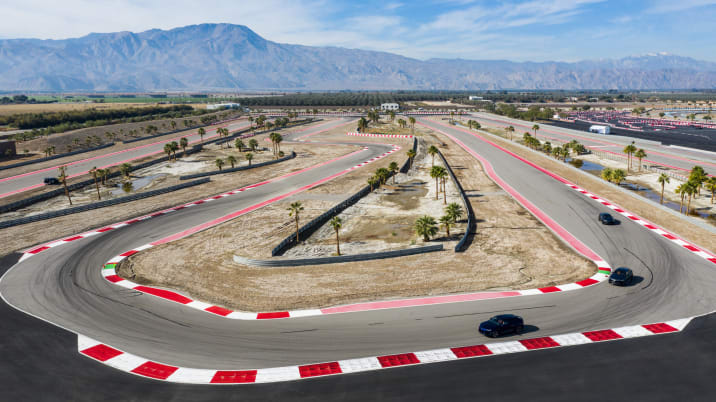 We spent most of the time on the track in Corsa, the most aggressive of the Urus’ drive settings. The suspension is lowered and stiffened to reduce body roll and the transmission is set up for quick, aggressive shifts. Lamborghini says the torque-vectoring and stability control systems allow for a moderate amount of oversteer in Corsa, but you really have to push it to get the wheels to slip. The rear-axle steering helps the Urus feel smaller than it actually is, though you’re still aware of the SUV’s proportions. Given the Urus’ size, the system is more helpful and less off-putting than on something like a Porsche 911. Goose the gas mid-corner and the computer will always sort out the details. It’s generally neutral, though there is a slight push toward understeer in the tightest turns.

Body roll – especially in Corsa – is all but non-existent, and the seats do a good job of keeping you planted without feeling claustrophobic. You never get the sensation that it might roll or crash or go belly-up halfway round. It’s amazing how far SUVs have come in this regard in the past few decades. Going too hot into a corner in something this big could have catastrophic consequences in the past, but the Urus generally shrugs it off. You never forget about the weight, but the surefooted nature means it’s less of an issue.

The steering itself is quick and accurate but feels a bit removed from what the tires are doing. It’s definitely the most SUV-like part of the track experience. The Urus is quick to change direction, but for something with a Lamborghini badge, we were hoping it would channel a bit more Porsche and a little less Audi. The brakes are much the same. Lay into the pedal and the Urus will stop with fervor, but there’s a bit missing from the feel. There was also a bit of wiggle from the rear when the weight shifted to the front at the end of The Thermal Club’s longest straight, a bit disconcerting in a vehicle this big. 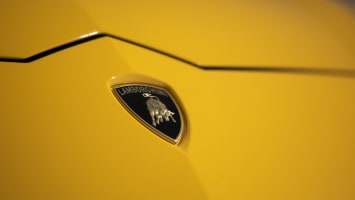 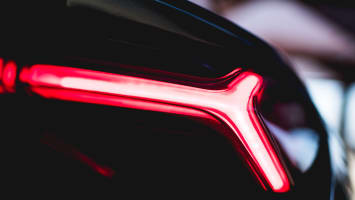 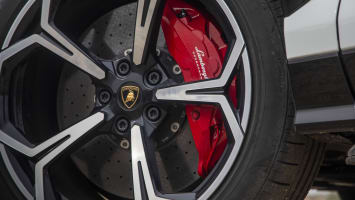 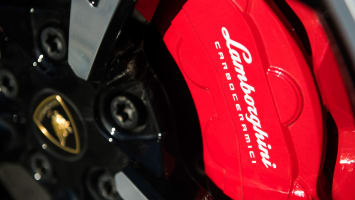 Thanks to the refined handling, big brakes and oodles and oodles of power, the Urus is a hoot and easy to drive quickly around the track, though you’re always aware that the computer is doing a lot of the work. Still, you don’t expect a crossover to move like this, so when it does, it just makes you smile. It’s not a precision tool, but that’s fine. Beat on it. It’s a lot of fun to let your right foot do the talking. There’s enough refinement in the handling to keep things interesting in a corner.

There’s definitely a lot of Volkswagen and Audi in there, too, something we noted in our first drive review. Likely too much for some, especially if they might be upgrading from an Audi Q7. That said, we’re not sure how much the target market will care about such things. Similar criticism was levied against the Porsche Cayenne a decade plus ago, and it didn’t matter one iota to the masses that scooped them up.

A few from last week. The @Lamborghini Urus and my dumb face in a helmet. @therealautoblog pic.twitter.com/pa3UMpBzAw

That Lamborghini badge carries a lot of cachet and is worth its weight in envy and jealousy. Few other vehicles will make the neighbors take notice like an Urus does, and when it’s this capable and eye-catching, so what if there’s a little Audi baked into the bones? The Urus is loud and brash and fast as hell, and there’s an inherent silliness to flogging an SUV on a track. That’s part of what makes it so fun. The Urus feels distinct enough from its Volkswagen Group brethren to warrant far more than a second glance. Owners of classic Lamborghinis like the Miura and Espada might snub their noses at it, but that’s not who the Urus is aiming for.
Autoblog Reviews