The 2020 BMW X6 has been completely redesigned, represented the third generation of the original crossover “coupe” (although we prefer the term fastback crossover). Yet, even if the redesign was indeed complete from head to toe, it was done in a conservative manner. The exterior is more aggressive and distinct from its X5 sibling with a forward-leaning front fascia and aggressive kidney grilles. The rear gets wide, slender taillights. It doesn’t just look like an X5 with a weird roof anymore. The inside is more conservatively reworked, adding angular vents and cowls to update the driver-oriented BMW dashboard shape. Each model now has more powerful engines, from the standard turbocharged inline-six to the twin-turbo V8s.

These changes improve the X6, but it lags behind some more conventional midsize crossovers, including the better-riding, better-handling, and better-appointed Mercedes-Benz GLE-Class. But when looking specifically at the midsize fastback crossover market it pioneered, the X6 has fewer rivals and makes a more compelling case for itself. Among these is the new Porsche Cayenne Coupe, which is more expensive than the X6, the Mercedes-AMG GLE Coupe, which is still based on the previous-generation GLE but will be updated soon, and the slightly larger and less coupe-like Audi Q8. Against these, the BMW X6 offers a solid combination of a modern interior, strong engines, a wide range of trims, sporty design and competitive pricing that help make up for some of its flaws.

The X6 has been completely redesigned for 2020 including the exterior, interior and powertrains. 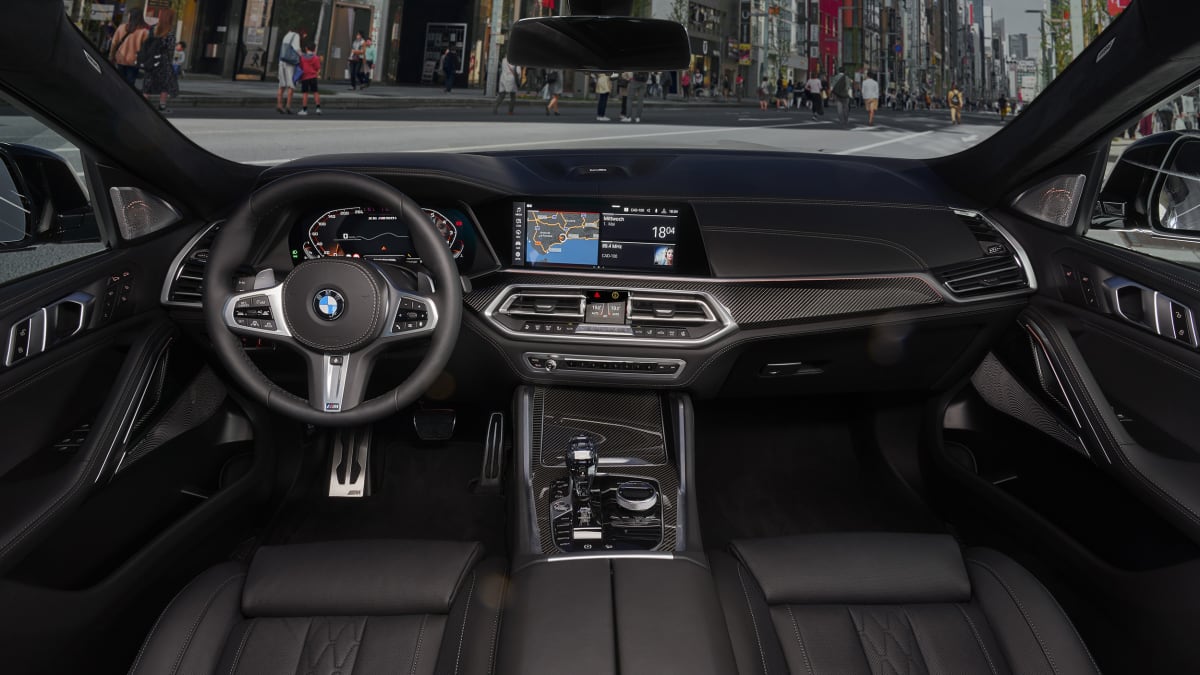 The X6 interior is an evolution of past BMWs. The dashboard remains unfussy and uncluttered with a modest offering of traditional buttons. Air vents and trim have been given a more angular look than in past BMWs, and that carries over to the infotainment display and digital gauges. Like with past BMWs, the center stack and infotainment screen are canted toward the driver. Materials such as leather, aluminum and carbon fiber adorn the interior and feel nice, but the semi-traditional interior doesn’t wow like a flashy Mercedes or a modern and minimalist Audi.

The X6 also receives the latest version of BMW’s iDrive tech interface. It’s smooth and quick in operation – the iDrive controller feels solid and precise while touchscreen functionality provides useful redundancy. The standard dual 12.3-inch screens for instruments and infotainment are bright and sharp. The menu system is easier to navigate than it used to be, but BMW still relies on many layers of menus that can be annoying to dig through. BMW is unique in offering an optional gesture control feature that gives the driver and passengers the ability to control settings such as volume by waving their hands in the air. It’s novel, but we’ve found it to require more effort than pressing a button or screen while also not providing as accurate adjustments as those “old-school” interfaces. A notable oversight in the X6’s infotainment offerings is the lack of Android Auto support. Apple CarPlay is included as standard and is distinctive in operating through Bluetooth, but we’ve experienced connection issues in some BMWs. 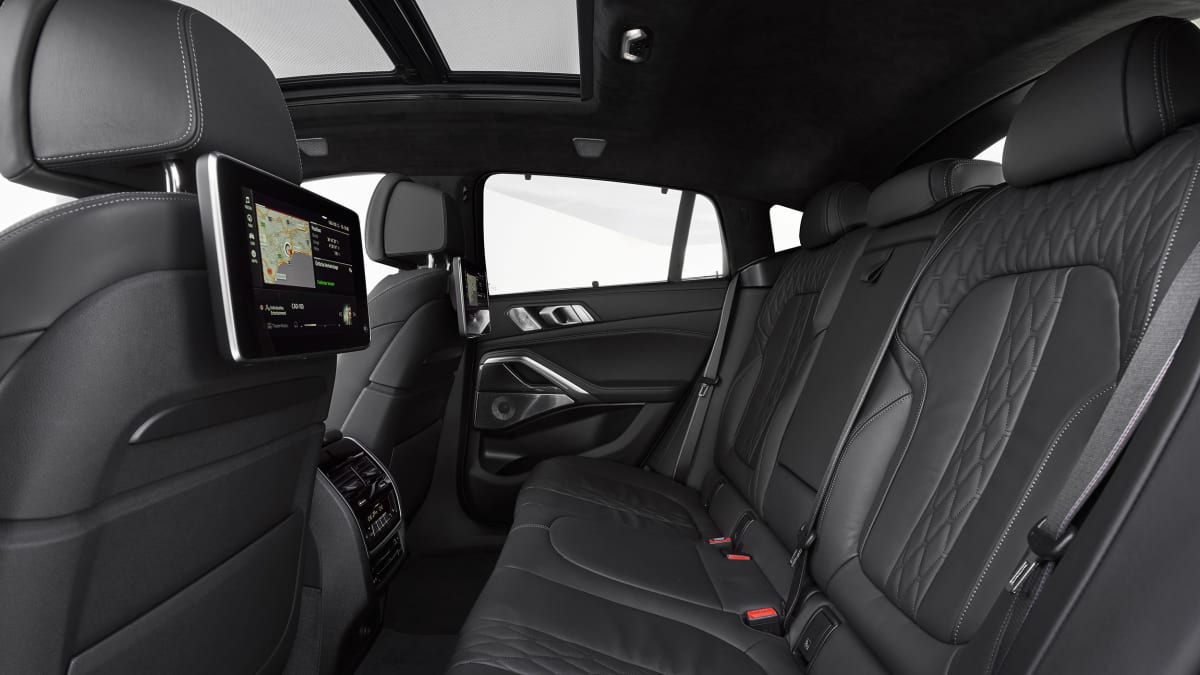 Inside, the X6 offers the most shoulder room in the segment based on reported numbers. It surprisingly has more headroom up front than the taller Mercedes and Audi, though the rear seat is tighter. The Audi also wins the title of most legroom in the segment both front and rear. Though the Audi also has the most cargo space behind the rear seats at 30.5 cubic feet, the X6 does offer competitive cargo space with 27.4 cubic feet, topping the Porsche and Mercedes by more than 4 cubic feet each. Maximum cargo space is 59.6 cubic feet, just one behind the Mercedes and Audi.

Also worth noting is how the X6’s interior fares against its more traditionally shaped twin, the X5. Unsurprisingly, the X5 offers more headroom, but the space that’s present in the X6 won’t leave your passengers slouching – they’ll just be a little closer to the roof. As for cargo, the X5 has more cargo room behind the seats and with them folded at 33.9 cubic feet and 72.3 cubic feet, respectively, which yields far more versatility. Think of the X5 as having a proper SUV-like cargo area, whereas the X6 has something more akin to a tall trunk. 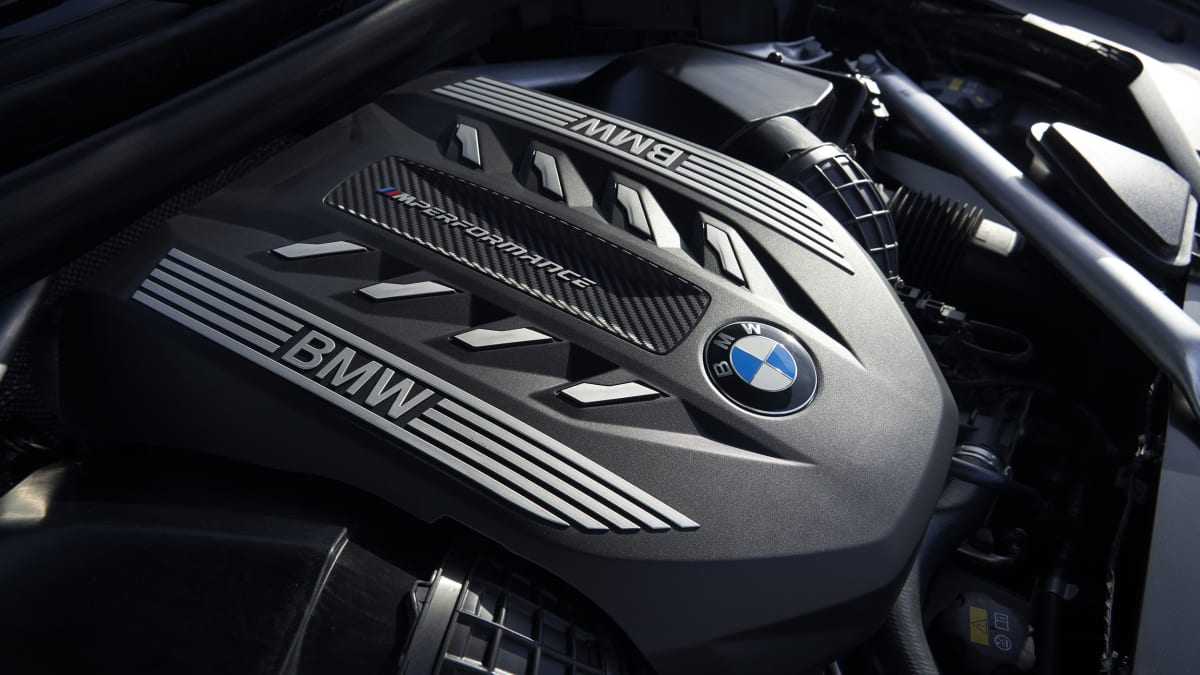 The new X6 has a range of engines, from comfortably quick to insanely fast, each one paired with an eight-speed automatic transmission. The 40i trims come with a turbocharged 3.0-liter inline-six that makes 335 horsepower and 330 pound-feet of torque. The rear-wheel-drive sDrive40i returns the best fuel economy of the range with 21 mpg city, 26 mpg highway and  and 23 mpg combined. With a 0-60 time of 5.2 seconds, it’s slightly quicker than the all-wheel-drive xDrive40i. It is also slightly less efficient returning 20/26/22 mpg. These six-cylinder models can be made sportier with the addition of the M Sport package that adds stiffer adaptive suspension and louder exhaust.

The M50i upgrades to a twin-turbo 4.4-liter V8 that makes 523 horsepower and 553 pound-feet of torque. The M50i only comes with all-wheel drive. It will hit 60 mph in 4.1 seconds, making it the fastest-accelerating X6, though its top speed is the same as the six-cylinder models: 130 mph with standard all-season tires and 155 mph with summer tires. Unsurprisingly, the M50i has the worst fuel economy of the range at 16/22/18 mpg. The M50i also gets upgraded brakes, stiffer suspension and an electronically controlled rear limited-slip differential. Four-wheel steering is another available performance option.

The high-performance X6 M comes with a twin-turbo 4.4-liter V8 that’s been massaged to produce 600 horsepower and 553 pound-feet of torque, which allows the M to hit 60 mph in just 3.8 seconds. Upgrading to the M Competition brings power up to 617 horsepower, while torque remains at 553 pound-feet. The 0-60 time drops to 3.7 seconds for the M Competition. Both M models have a standard top speed of 155 mph, and the optional M Drivers’ Package increases the top speed to 177 mph. In addition to the extra power, the X6 M cars get an electronically-controlled limited slip differential, additional chassis bracing, larger brakes with more powerful calipers, electronically controllable exhaust note and retuned suspension with active roll stabilization. Fuel economy is not available for these X6s yet, but expect them to be even lower than the numbers for the M50i.

The highlight of the X6 driving experience is its powertrain. The base six-cylinder is among the smoothest, quietest engines in the business. It has a fast-spooling turbo and quick throttle response giving you precise, absolute control over it. Those characteristics apply to the available V8 in the M50i, except you have more power at your feet and a deeper soundtrack for your ears. We wouldn’t be surprised if the X6 M continues this trend, but it was only recently introduced and we haven’t had an opportunity to drive it. The eight-speed transmissions in the X6 crossovers are ideal partners to the engines, too, with seamless, rapid shifts regardless of whether it’s shifting on its own or you’re directing the gear changes.

Where things start to sour is with ride and handling. The standard X6 has a fairly soft suspension that is fine over mildly rough pavement, but large bumps yield a lot of vertical movement, usually following a fairly sharp kick. There’s more body roll than expected, as well, and while that can be reduced by selecting a sportier drive mode, you end up with a rougher ride. Steering is disappointingly disconnected from the front of the car. It’s accurate enough, but far from satisfying. The M50i with its adaptive sport suspension has notably less body roll and generally better handling. Its adaptive dampers also make it more comfortable, in part due to better body control over large bumps. It could be worth it to option your six-cylinder model with its own adaptive suspension upgrade. The M50i’s steering isn’t any better, though.

What more can I read about the X6?

Our first drive of the redesigned BMW X6 in M50i trim with the twin-turbo V8. 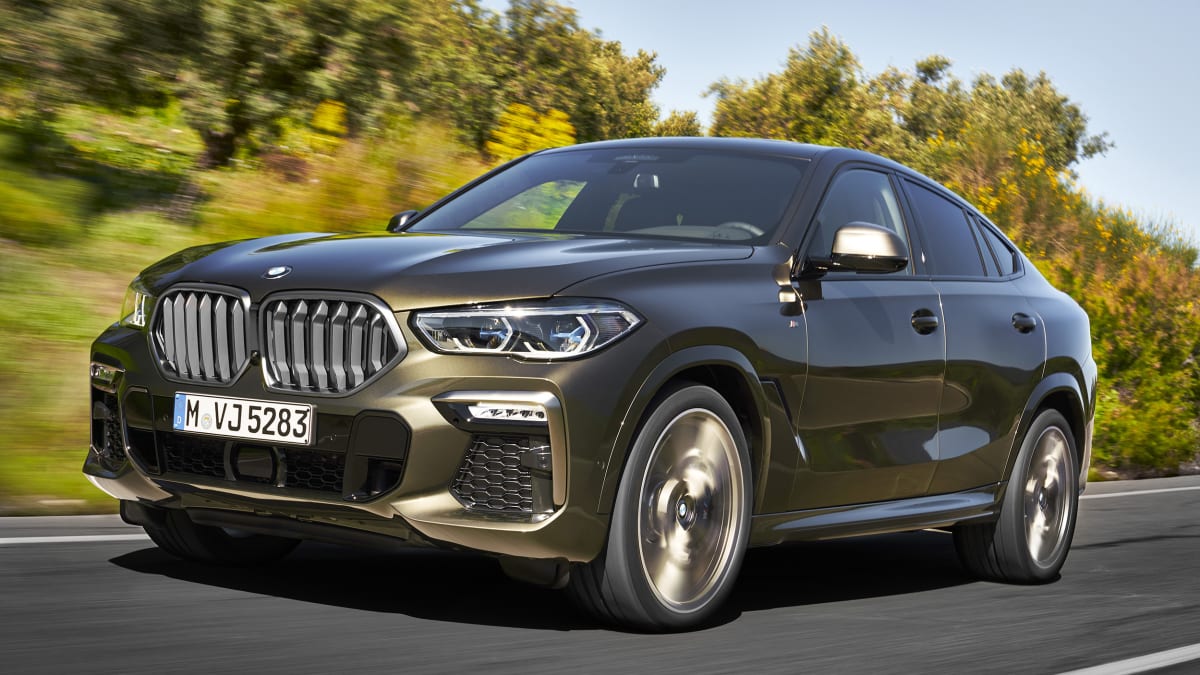 Additional details on the high-performance X6 M from the crossover’s official reveal. 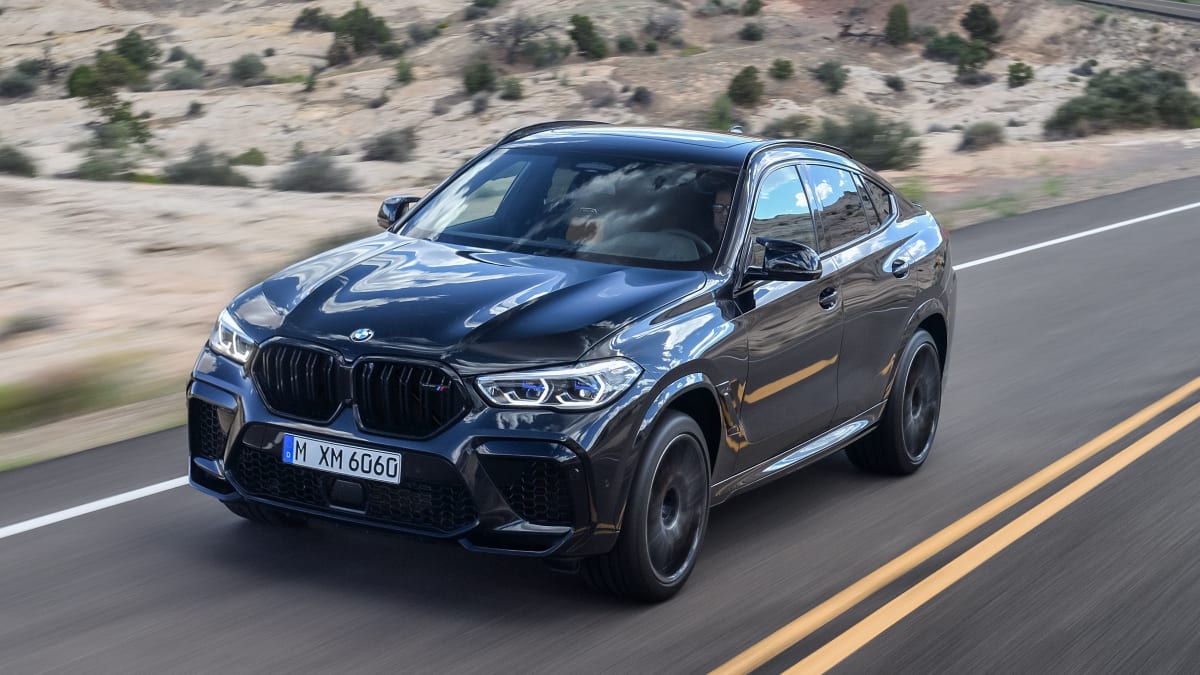 What features are available and what’s the X6’s price?

The BMW X6 line starts with the sDrive40i at $ 65,295. In addition to the 335-horsepower six-cylinder engine and rear-wheel drive, it includes 20-inch alloy wheels, power tailgate, automatic lights and wipers, a panoramic sunroof, dual-zone automatic climate control, heated 12-way power front seats, leather upholstery, power adjustable steering wheel, and dual 12.3-inch screens for instruments and infotainment. There is a massive list of options available. You can find a full breakdown of features, specs and local pricing here on Autoblog for the X6 and the X6 M.

What are X6’s safety equipment and crash ratings?

The base X6 comes standard with low-speed automatic emergency braking, pedestrian detection, lane departure warning, blind-spot and rear cross-traffic warning, and parking sensors. The optional Driving Assistance Professional package adds an enhanced adaptive cruise control system with stop-and-go capability, steering assist, and the ability for the car to slow itself to a stop in the event of the driver experiencing a health emergency. Automatic parking and additional parking cameras are available as part of the Parking Assistance Package. A night-vision camera with pedestrian detection is also available as an option.

Third party crash test ratings are not yet available for the 2020 BMW X6.