The 2020 Hyundai Sonata is the latest generation of the Korean automaker’s staple family sedan. Long known as a value entry, the Sonata has grown into a competitive player in the midsize segment thanks to a decade of serious effort from Hyundai, which remains committed to selling four-door sedans despite pressure to add more crossovers and SUVs to its lineup. Hyundai’s family sedan offers a little something for everybody, including an impressive hybrid model that returns great fuel economy numbers and doesn’t compromise on utility.

In a word, everything. Hyundai has re-engineered the Sonata from the ground up, restyling it with a coupe-like roofline and adding new safety and convenience features and further expanding its electrification efforts with an overhauled hybrid model. You can read more about what’s new and different in our 2020 Sonata first drive review. 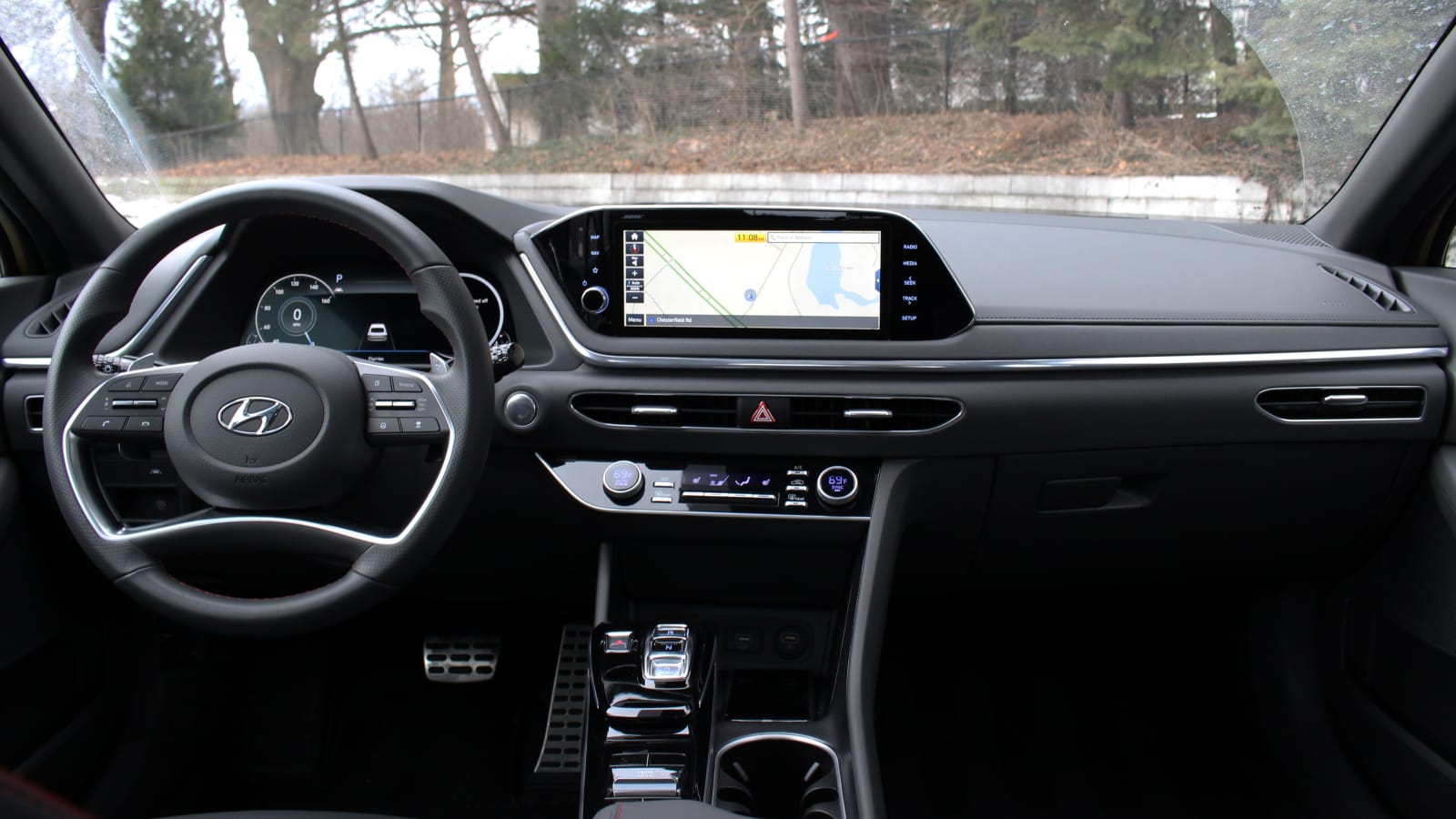 What are the Sonata’s interior and in-car technology like?

The 2020 Hyundai Sonata boasts a sleek, futuristic cabin. Like most new cars, its infotainment control screen is featured prominently atop the dash. Base models get an 8-inch screen, while a 10.25-inch touchscreen on the center stack is optional from the SEL model on up. No other midsize sedan offers such a large screen. Behind the wheel sits a customizable 12.3-inch virtual cluster display (optional on SEL, standard on SEL Plus and Limited), and a full-color head-up display is also offered on the top-of-the-line Limited.

There are some nice touches for tech junkies, including Hyundai’s “Digital Key,” which allows the owner to unlock the Sonata by waving an authorized smartphone over the exterior door handles. Hyundai also offers Android Auto and Apple CarPlay integration as standard equipment. One USB charge port comes standard; a second USB charge port for the rear is available from the SEL package on up.

Hybrid buyers are in for a special treat, as those who opt for the range-topping SEL Plus also get a solar roof. In sunny conditions, these panels can replenish up to 2 miles of additional range per day, or approximately 700 miles per year. More practically, they can power accessories while the engine itself is off, like the air conditioning on a sunny day. 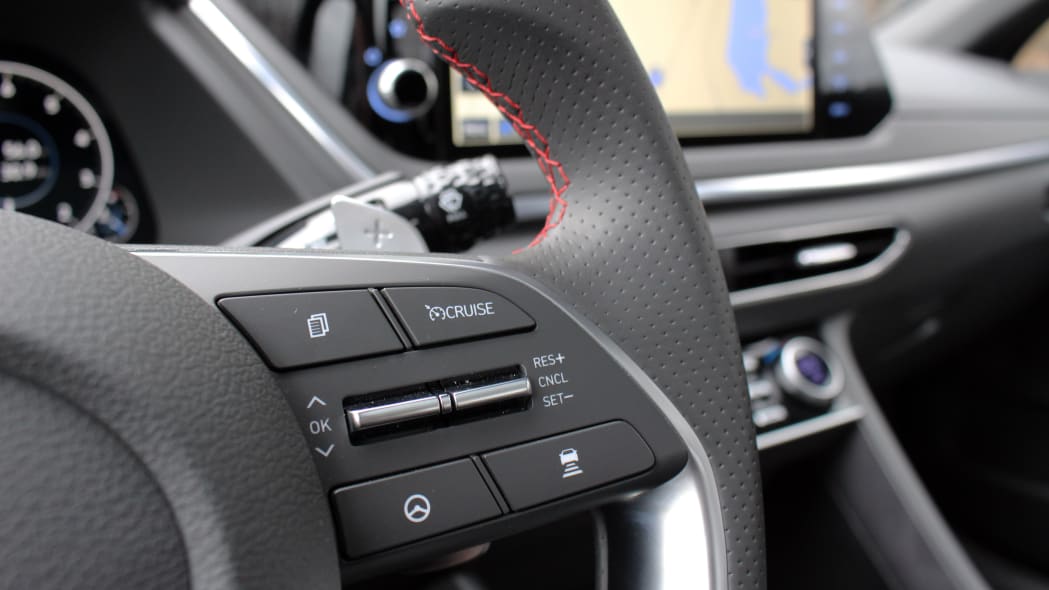 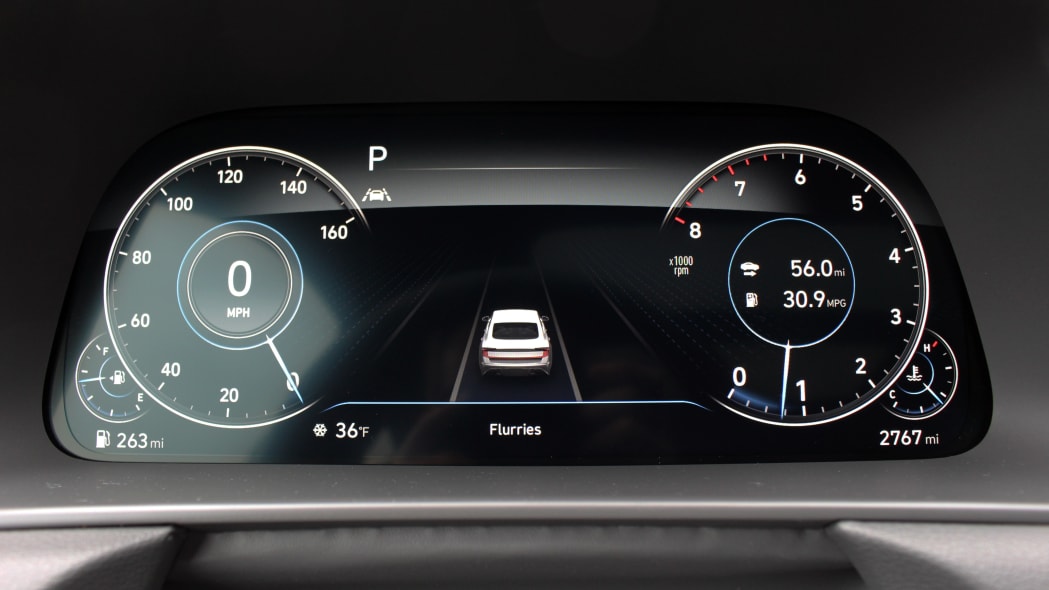 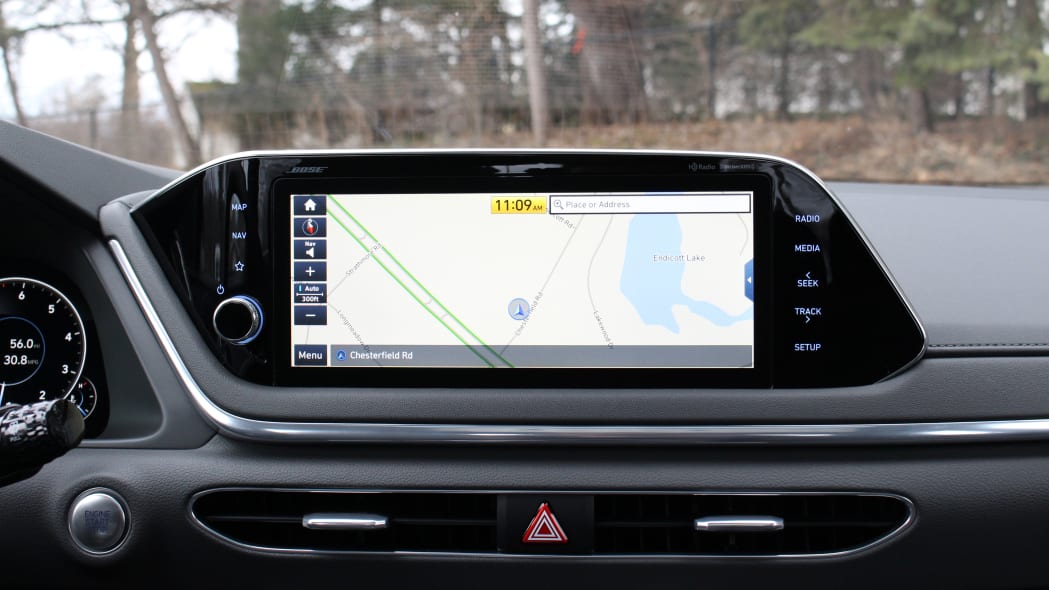 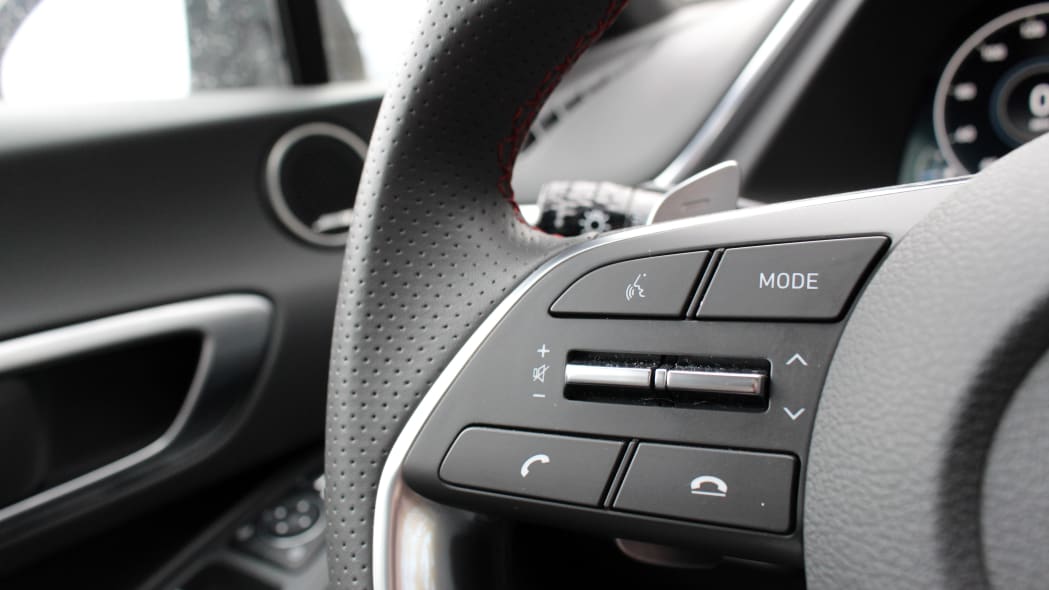 How big is the Sonata?

The midsize sedan segment is fairly uniform in terms of size and space; the Sonata is no exception. It ostensibly seats five adults, though we wouldn’t recommend putting one in the middle of the rear bench for too long. Three kids can fit more comfortably in a pinch. LATCH anchors are offered for all three rear seating positions.

The Sonata has a 60/40-split folding rear seat with a 16.3-cubic-foot trunk for all models, including the hybrid. The 2020 Sonata is available with three different powertrains. The base engine in the SE and SEL is a 2.5-liter, naturally aspirated four-cylinder making 191 horsepower and 181 pound-feet of torque. These figures are typical for entry-level engines in the midsize segment. This engine is rated at 28 mpg city, 38 mpg highway and 32 mpg combined in the SE model and 27/37/31 in the SEL.

Stepping up to the SEL Plus and Limited models means switching to the 1.6-liter turbocharged four-cylinder. This engine produces less power (180 horses) than the base 2.5, but more torque (195 lb-ft). It likewise offers similar numbers to other lower-end turbocharged engines offered by the competition, such as the Honda Accord’s 1.5-liter. It even offers more power from a smaller package than the 2.0-liter turbo offered in the Volkswagen Passat. This engine is rated at 27 mpg city, 36 highway and 31 combined.

The Sonata lacks a higher-output engine, such as the 2.5-liter turbo-four in the Mazda6 or 2.0-liter turbo in the higher-end Accord. Toyota still offers a V6 in the Camry.

Hyundai’s third powertrain offering is a hybrid. It comprises a 150-horsepower, 2.0-liter naturally aspirated inline-four and a 39-kW electric motor. Combined, they produce a total of 192 horsepower. Hyundai says this combo is good for up to 50 mpg city, 54 highway and 52 combined.

Those fuel economy numbers are specific to the Blue model, which is lighter (by a little more than 100 pounds) and sports smaller (16-inch) wheels with efficiency-focused tires. Hybrid SEL and Limited models top out at 45 mpg city, 51 highway and 47 combined. These figures compare favorably to the 2020 Toyota Camry and Honda Accord Hybrids. In terms of actual gas used, the difference between the 47-mpg trims and the 52-mpg Blue is actually pretty negligible. 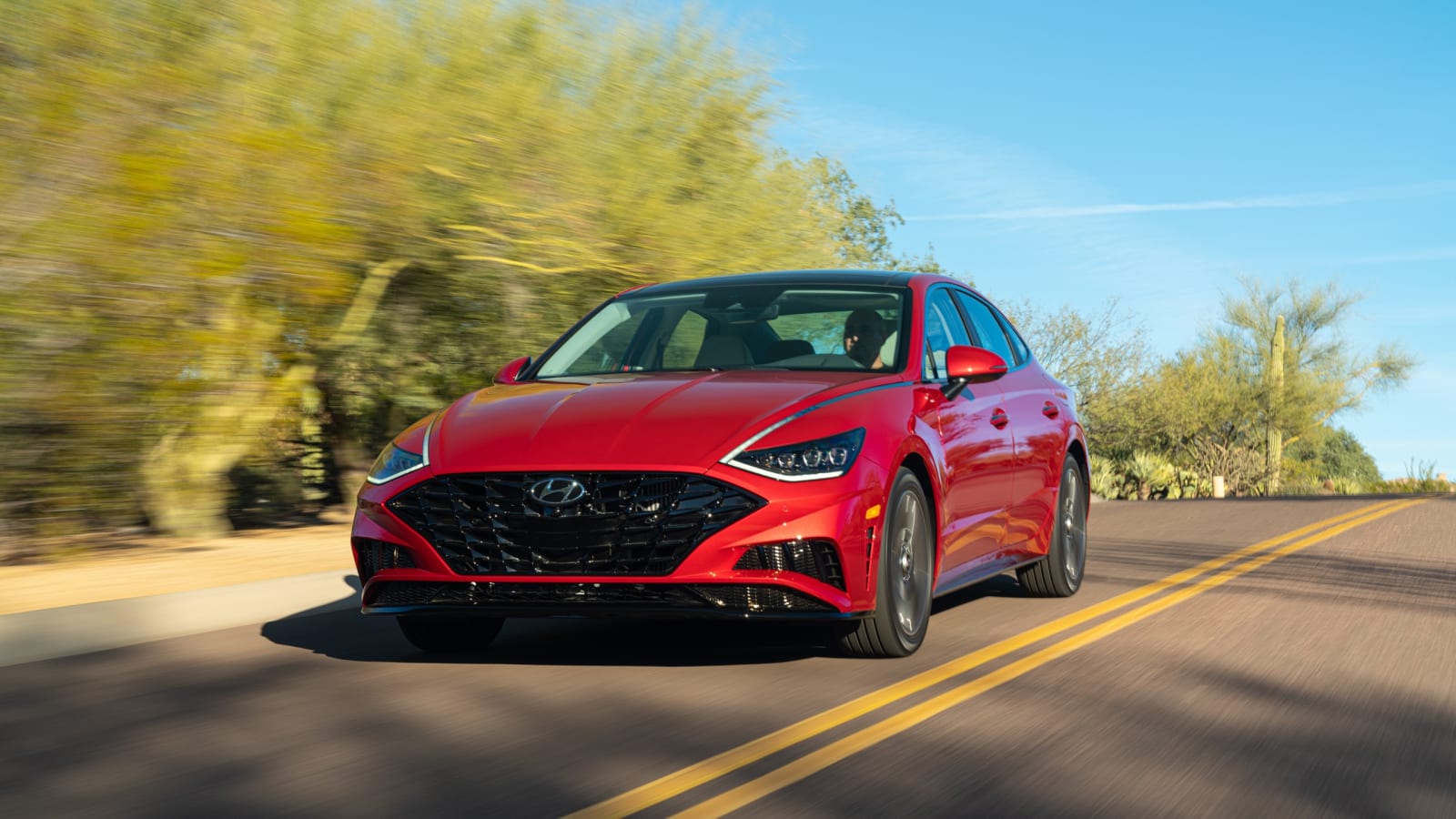 The 2020 Sonata features a MacPherson Strut suspension in the front and a multi-link rear setup, which make for a comfortable and composed ride. It strikes a neat balance between comfort and handling prowess for a daily driver. Both the Honda Accord and Mazda6 are the superior athletes in this class, but the Sonata isn’t far behind. We recommend the regular Sonata to a non-enthusiast for commuting duties. The will be the driver’s sedan in the new Sonata’s lineup.

Hyundai’s new CVVD engine technology debuts in the company’s 1.6-liter turbocharged four-cylinder, but you wouldn’t know anything special is happening had you not been warned. It’s a torquey little four-cylinder with enough grunt to get off the line in a hurry. There’s plenty of torque throughout the rev band; lag is minimal, and it’s pleasant enough to listen to. However, it’s not a substantial performance upgrade – larger four-cylinder turbo engines from Honda and Mazda are still much quicker.

We haven’t driven a Sonata with the 2.5-liter naturally aspirated four-cylinder yet, nor have we had a chance to sample the new hybrid. We will update this guide when we do.

What more can I read about the 2020 Hyundai Sonata?

Our first drive of the 2020 Hyundai Sonata was in a Korean-spec car overseas, but apart from the powertrain, it gave us a good idea of what to expect from the sedan when it came stateside. 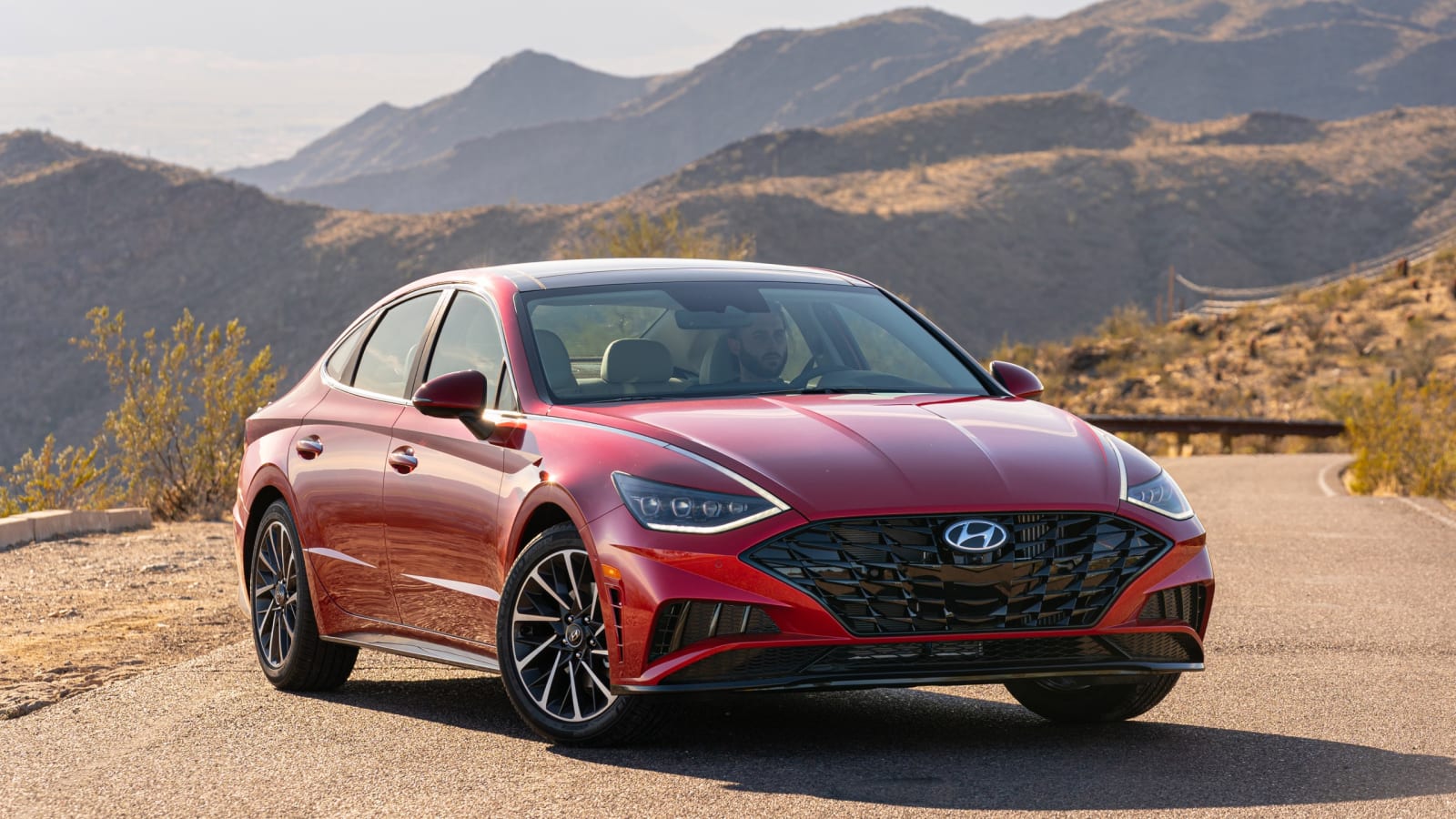 2020 Hyundai Sonata Hybrid vs Accord and Camry

The midsize sedan segment boasts several hybrid models. Here’s how the Sonata stacks up against the Honda Accord and Toyota Camry hybrids on paper. 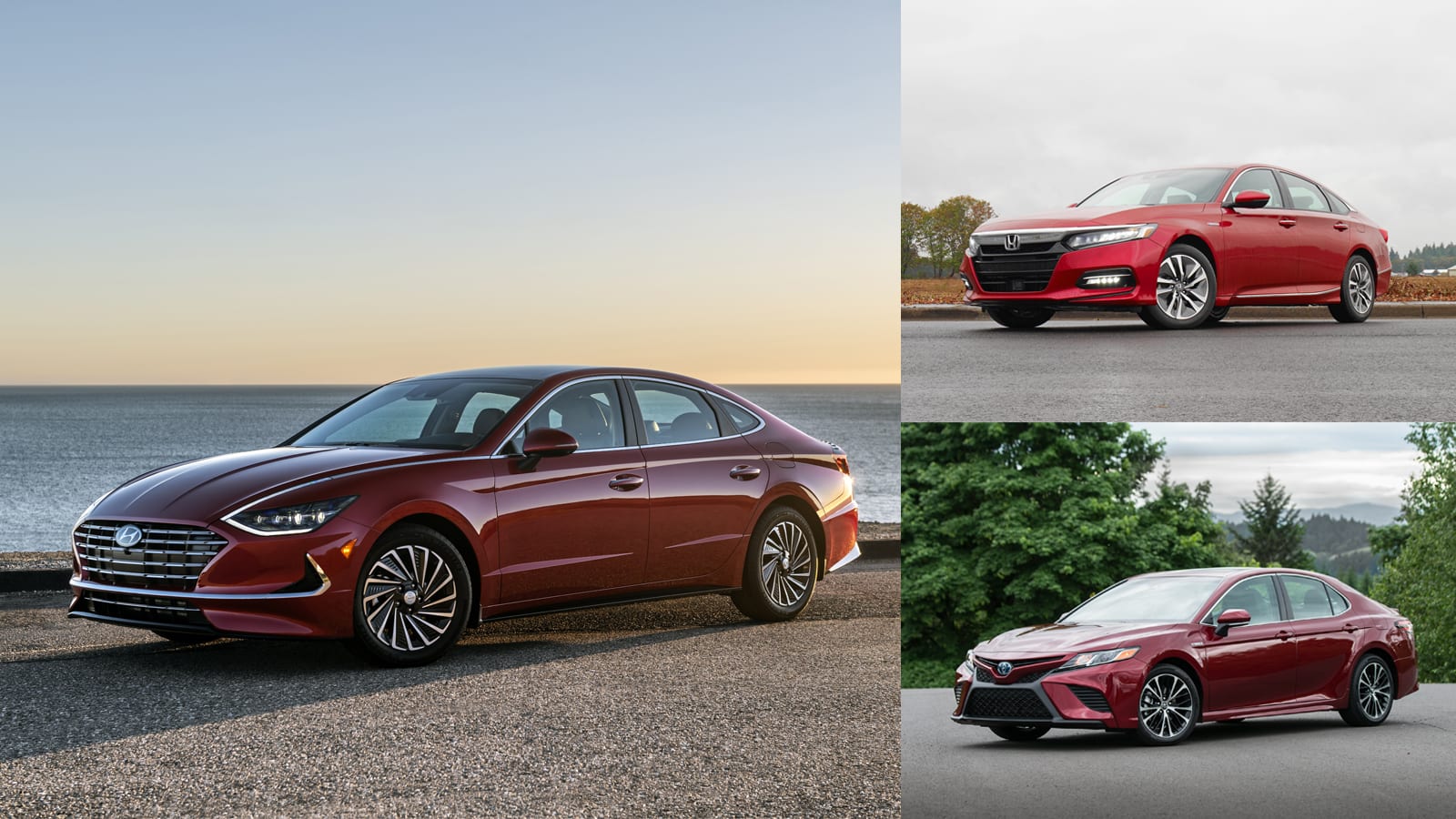 Hyundai’s unveiling of the 2020 Sonata Hybrid took place at the Chicago Auto Show; this is what we learned about the upcoming electrified Hyundai. 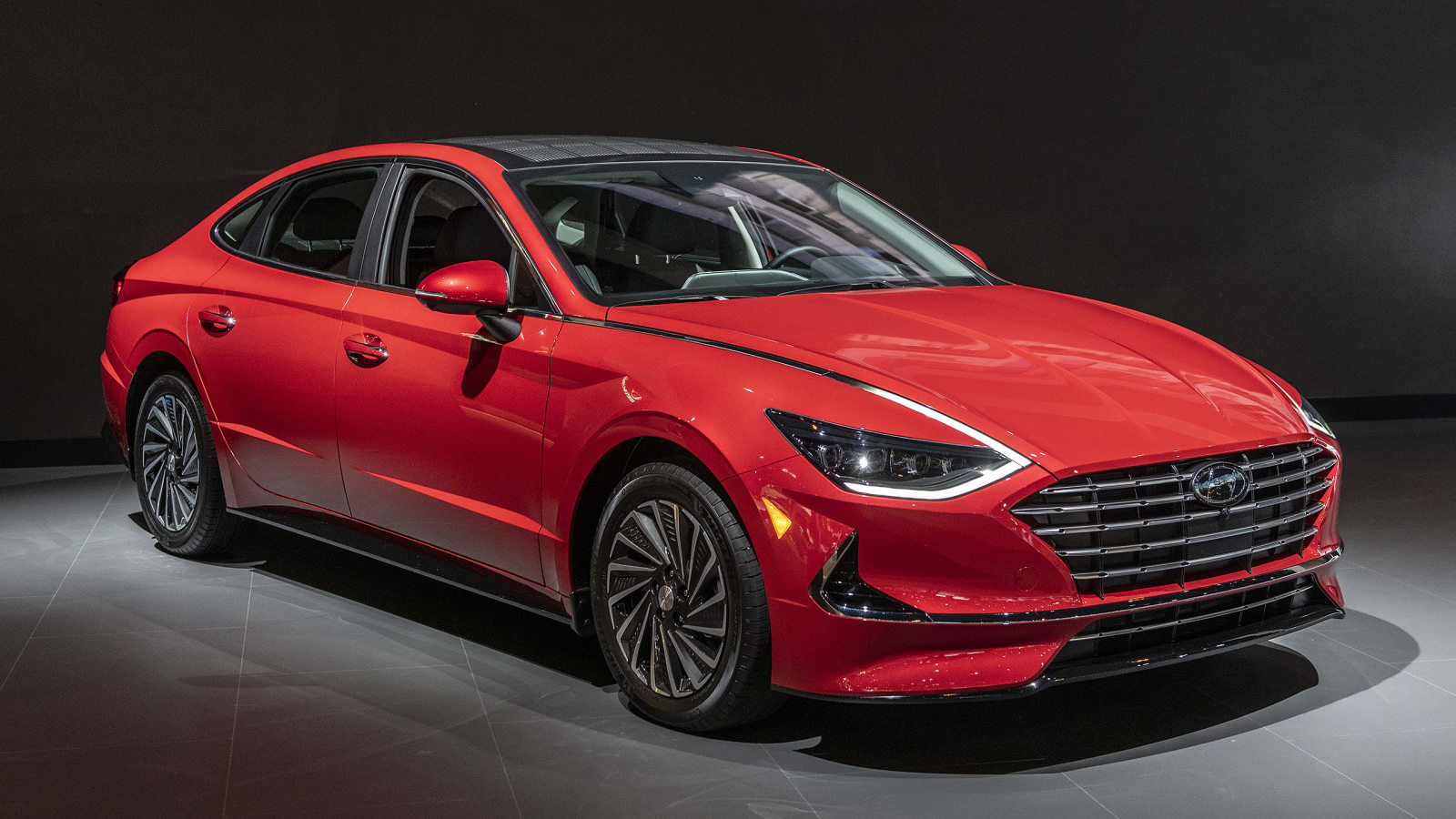 What features are available and what’s the Sonata’s price

The Sonata SE is robustly equipped for a base-model vehicle, but the true value leader is the SEL Plus, which includes the 1.6-liter turbo engine, 18-inch alloy wheels, suede and leatherette seating surfaces, Qi wireless device charging and an additional USB charge port — among other useful options — all for a $ 4,055 premium. That may sound like a lot, but it’s a great deal of equipment for a price below $ 30,000.

For a full breakdown of each trim level’s feature content, specs and pricing, check out our 2020 Hyundai Sonata page here on Autoblog.

Pricing for the 2020 Sonata Hybrid has not yet been released.

What are its safety equipment and crash test ratings?

The 2020 Sonata Limited received an IIHS Top Safety Pick rating, falling short of the coveted Top Safety Pick+ due to the weaknesses of the headlights offered as standard equipment on the SE, SEL and SEL Plus trims. The government (NHTSA) has not yet evaluated the 2020 Sonata.