Few automobiles garner as much mystique as the original Acura NSX. I worshiped this car from afar, consigned to the fact that the closest I was ever going to get to the steering wheel was a Playstation controller. When I got the email inviting me to drive Clarion Builds’ restored and tuned 1991 NSX, I thought it was spam, a chain email with some generic header sent to a dozen or so people to garner some press coverage. Surely this wasn’t a real invite where I get to drive a real NSX using my real hands and feet. Some people say don’t meet your heroes. Some people are wrong.

I knew the car by reputation. In roughly 10 months, Clarion Builds, a division of the Japanese electronics company mostly known for high-end audio systems, worked with partners like AEM and AutoWave to transform a ’91 NSX with nearly a quarter-million miles on the clock into what you see here. Everything, from the engine to the bodywork to the leather on the seats, has been upgraded and restored with a mix of both OEM and aftermarket parts. The final product is a stunner. It’s tuned, but not slammed, stanced or any other adjective that describes a car with compromised performance and questionable looks. It’s simply a tastefully tuned NSX. 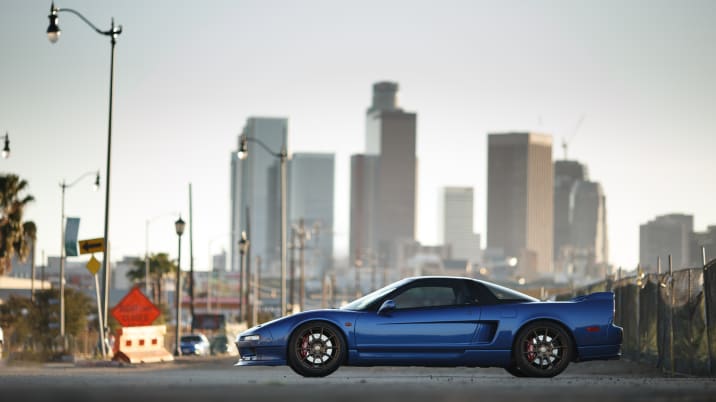 The NSX, especially an early car with pop-up headlights, is one of the all-time great car designs. There are no unnecessary lines or curves. It’s all purposeful. As expected with something with 230,000 miles, this NSX had a number of dings and dents. Clarion Builds has fixed those, replacing the hood and spoiler with carbon-fiber parts from an NSX-R. The fenders are slightly wider than stock, helping cover the staggered Rays Engineering VOLK ZE40 wheels, 18-inch up front and 19-inch out back. After seeing it in the flesh with the blue paint, black roof and bronze wheels, I don’t think there is a better fit for this car.

The original but tired 3.0-liter V6 and five-speed manual have been swapped for a 3.2-liter V6 and six-speed manual from a 2004 NSX. Stock, this engine is a wonderful ode to the internal combustion engine. It sings a sweet song all the way to a sky-high 8,200 rpm redline. Still, it wasn’t enough. The engine now wears a Whipple-style supercharger, pushing roughly 9 psi of boost. Other modifications include a one-off carbon-fiber intake, a hand-built exhaust and a new ECU, all from AEM. All in, Clarion Builds says this NSX makes 403 horsepower and 296 pound-feet of torque at the wheels. 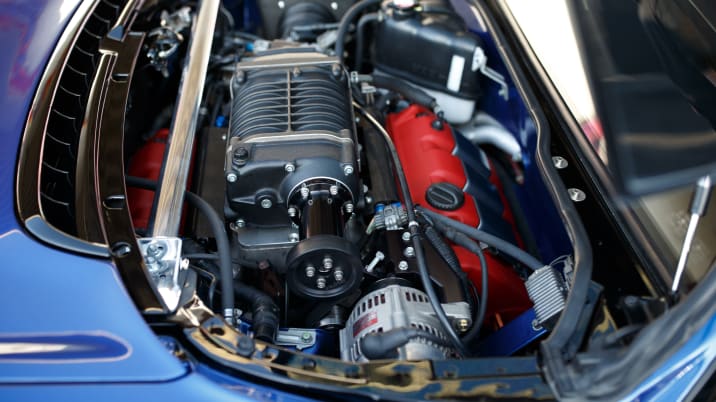 God, it feels good to push this thing. Power comes on so quickly and so smoothly that you forget you’re driving an Acura. There’s no waiting for power or VTEC like in some other Honda products, just stab the throttle and don’t short shift. Once VTEC does come on, the engine does its best impression of a Super GT car. It sounds like nothing else I’ve ever driven. The exhaust is some strange fusion of Japanese and Italian, with a ripping crescendo that never seems to end. I couldn’t stop laughing the first time I really laid into it.

Still, this is far more than a engine swap and some bolt-ons. The car is fitted with KW Variant 3 coilovers at all four corners. Sure, the original NSX was tuned by Ayrton Senna, but, as Clarion Builds puts it, a lot has changed since 1991. The ride isn’t very forgiving, a trait exacerbated by Michigan roads. Still, it feels wonderful in a corner.

Copious amounts of evenly distributed power allow you to pull it out of a turn with ease. Center the wheel and kiss the redline as you make your way up and down the gears. I could sing praises about Honda shifters for days, and this NSX is no exception. Each movement of the lever is quick and precise, with a nice mechanical click as it slips into position. Once you get a feel for the pedals, the dance between heel-toe rev matching, shifting and steering becomes rhythmic.

Michigan isn’t exactly known for smooth bands of ribbon-like pavement, but we made it work. The car corners flat and smooth. The non-assisted steering is a wonderful throwback. Manual steering isn’t necessarily better, but the NSX’s rack is why so many enthusiasts light candles in remembrance. It’s firm and talks to you like Hemmingway, clean and athletic with no fussing about. As you can see in the photos, the NSX was originally equipped with sticky Michelin Pilot Sport Cup 2 tires. Those were later swapped for Pilot Super Sports, a far better fit for this car. A little less grip makes things interesting. Sure, no one wants to drive around on a slip-n-slide, but there is a thing as too much tire. Paired with the StopTech brakes, the NSX scrubs speed as well as any modern sports car. 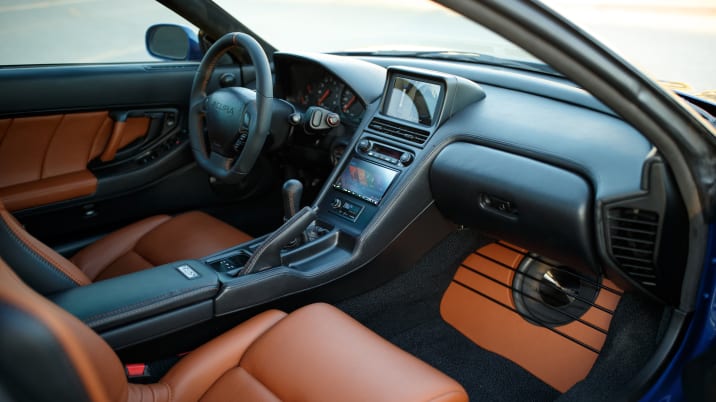 Still, this is meant to be an all-rounder, and Clarion Builds has done its best to carefully modernize the NSX’s interior. New leather from Leatherseats.com and Alcantara from Westminster Auto Upholstery graces the seats and door panels. It’s soft and helps the seats hug you better than most seats from the era. The Clarion Builds logo is stitched into the headrests. Thin A-pillars are just another reminder of how much modern safety equipment compromises visibility. A JDM navigation housing is used for the 360-degree camera that activates with turn signals like Honda LaneWatch.

As expected, Clarion Builds outfitted the NSX with its latest Full Digital Sound system. This assumes the owner would want to listen to something other than the AEM exhaust. Still, it’s a great unit that’s far more production-car than some overdone SEMA concept. It’s crisp and clear, with solid bass coming from the passenger-floor-mounted subwoofer. I’m sure with some tuning you could make it really thump and rattle like a ’92 Caprice, but, like the rest of the car, it’s set up just right. Because Clarion’s Full Digital Sound system doesn’t use amps, it’s low-draw and fairly lightweight.

No, it’s not stock, but that’s OK. It’s so well done that I don’t care. Clarion Builds makes no secret of the fact that this car, along with the 1974 BMW 2002 and the 1993 BMW 850Ci, are marketing exercises. The people behind the car didn’t want another overwrought SEMA vehicle so loaded up with speakers and fiberglass that what you’re left with is just a rolling pearlescent boombox.

The NSX was everything I hoped it would be. It has just enough of an edge to feel pure and connected. The feedback from the car hits you like a wave, washing over you via hands, feet, eyes and ears. It’s not the fastest thing I’ve ever driven. It’s not the most brutal or the most raw either. It is a wholly unique experience, at least for me. I don’t know if you can have nostalgia for something you’ve never experienced, but the years I spent admiring this car from a distance came rushing back to me. Simply put, it was good.