The festivities began with the Xbox briefing and showcase at the Microsoft Theatre. Think of this like the Volkswagen Group Night that happens ahead of the Frankfurt Motor Show. And put on a show is exactly what Xbox did. 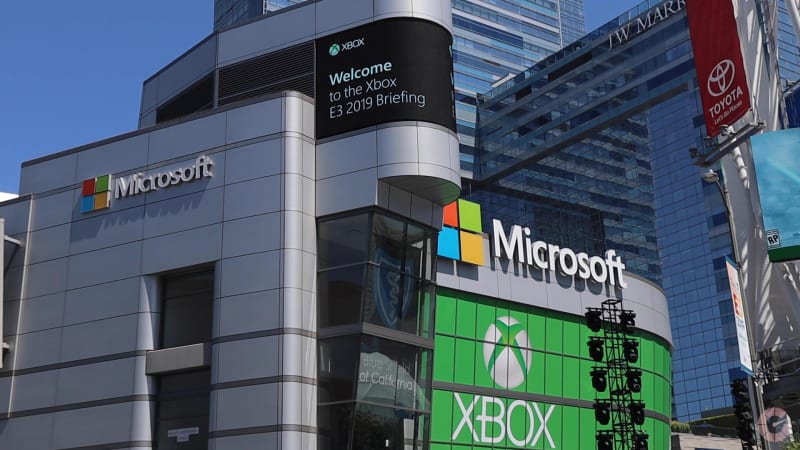 During the briefing, Xbox teased its next console, Project Scarlett, which will feature a Solid State Drive (SSD) and debut Holiday 2020 with Halo Infinite as a launch title. 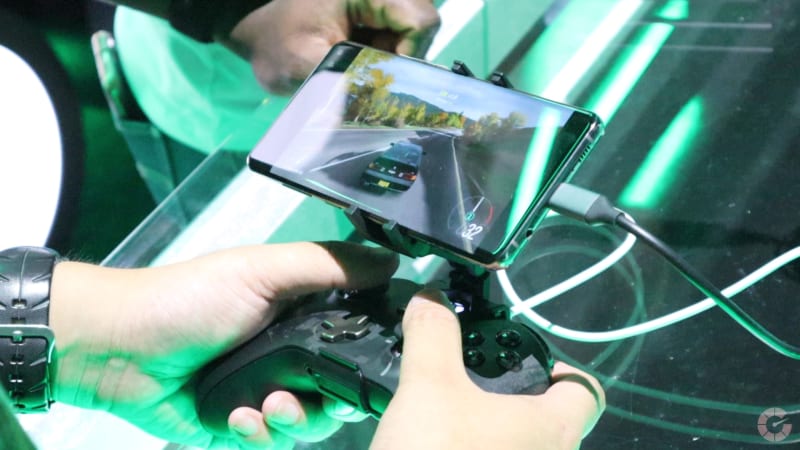 Xbox was also showing off its streaming technology Project Xcloud. I had a chance to play Forza on a smartphone that was connected to an Xbox controller. The footage was streaming in 720p but it still looked great, and gameplay didn’t lag. No word on when you’ll be able to stream your Xbox game catalog to your smartphone, but I imagine the capability is coming soon as Xbox will want to compete with mobile, which continues to disrupt the gaming space.

Xbox unveiled the LEGO Speed Champions expansion pack for Forza Horizon 4. We got to demo it, and I must say that it looks amazing and is a ton of fun to play. I would 10/10 recommend if you’re a fan of Forza or LEGOs, and I hope that they someday release a full LEGO racing game. 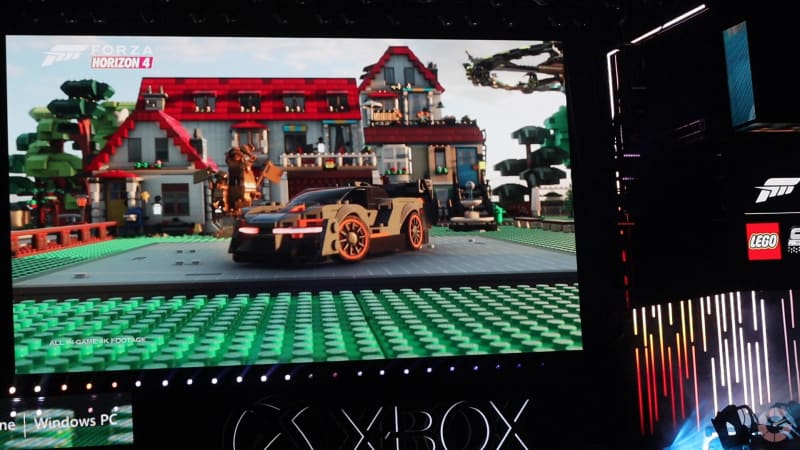 You can check out gameplay footage of LEGO Speed Champions on our YouTube page.

The show floor opened on Tuesday, June 11. The first thing I did was demo Crash Team Racing ahead of its June 21 launch date. It’s a fun go-kart-style racing game but still falls short of Mario Kart in my estimation. 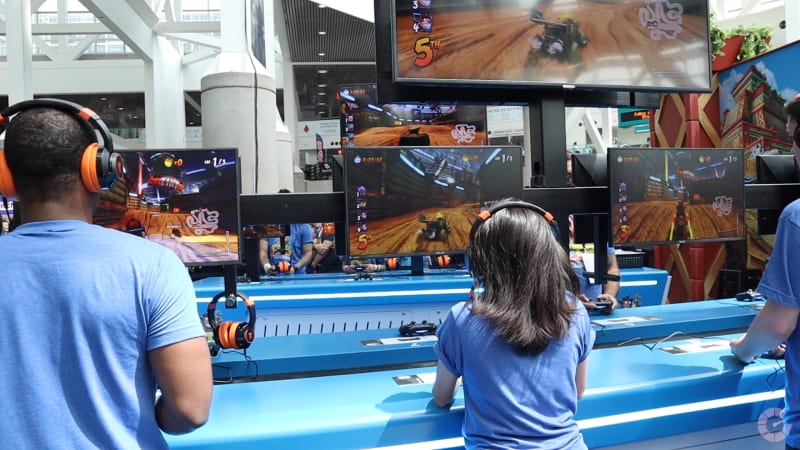 Sony and Electronic Arts (EA) were missing at this year’s show, but Nintendo had a presence. There were big displays for Luigi’s Mansion 3 and Mario & Sonic at the Olympic Games: Tokyo 2020.

I linked up with Autoblog contributor Carter Jung, and we demoed a $ 10,000 SIM racing rig from Next Level Racing. It was a wild experience, and the side-to-side sliding generated by the motion platform had me a bit wobbly-kneed for a few minutes after driving. It was awesome. 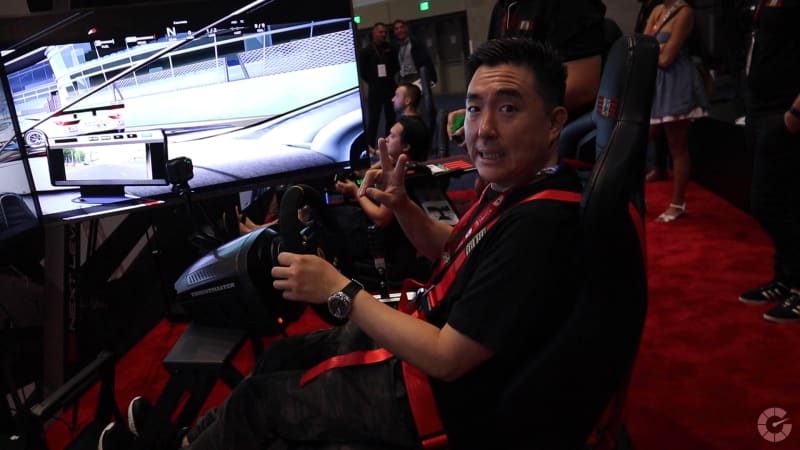 Another favorite of mine from the show floor was the My Arcade booth. I demoed My Arcade’s cute little Bubble Bobble Micro Player. These table-top cabinet games retail for $ 34.99 and are powered by micro-USB or four AA batteries. Bubble Bobble will be available sometime in June. 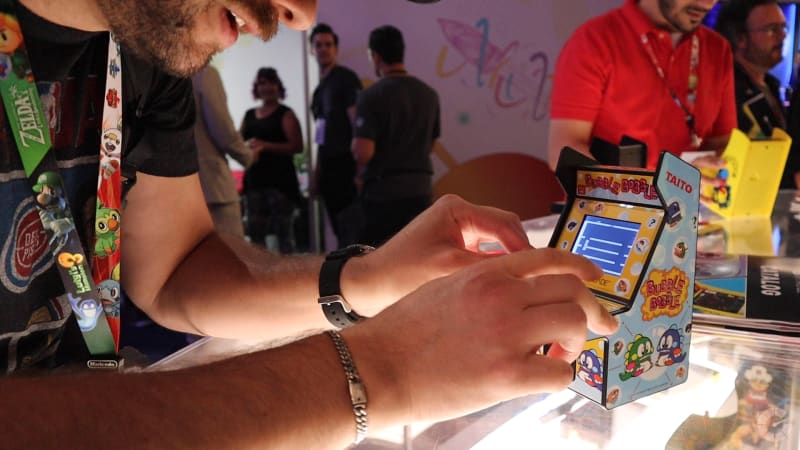 Even if you don’t self-identify as a “gamer,” I think you’d find this show to be a good time. Even though E3 is more of an industry show, there is a ton to see and do. You can see attempts to make it more consumer friendly. I’m not sure we’ll ever see E3 reach the level of a Comic-Con (about 66,100 people attended E3 2019, according to Gamespot, compared to the over 100,000 who routinely go to SDCC) but it’s certainly worth checking out. And this noob, for one, cannot wait to get back.

Check out the video for some key show highlights and all the things I did while in L.A.

[MUSIC PLAYING] EDDIE SABATINI: Hi, all. Eddie Sabatini for Autoblog here, and I’m coming at you from Los Angeles, California because I’m here covering the 2019 Electronic Entertainment Expo, better known as E3. It’s my first time attending, and it was described to me as the Super Bowl of gaming conventions. And after walking the show floor, I can see why.

Activities began Sunday, June 9 with the Xbox briefing and showcase. This is kind of like Volkswagen night that occurs ahead of the Frankfurt Motor Show, and Xbox put on quite a show.

EDDIE SABATINI: It was filled with world-premiere game trailers, lots of announcements, some pyrotechnics, and I’m sure you’ve seen and heard by now, an appearance by Keanu Reeves.

EDDIE SABATINI: Some of the announcements included the LEGO Speed Champions expansion pack for “Forza Horizon 4.” I had a chance to play it, and I must say that it looked great and was a ton of fun. I loved seeing the little LEGO bricks go flying when you hit an obstacle. My favorite premiere, though, was the “Microsoft Flight Simulator.” We didn’t get a chance to demo it, but man, did the trailer look gorgeous, and I cannot wait until we can try it out.

Probably the news that got the biggest audience reaction, aside from Keanu, was the announcement of the next Xbox game console, called Project Scarlett. It arrives holiday 2020 and is launching with “Halo Infinite.”

– This is Project Scarlett, the most powerful and highest-performing console we’ve ever designed.

EDDIE SABATINI: Also previewed was Project xCloud, which allows you to play your online game library anywhere without the need to bring your console along. I tested this tech on a smartphone that was streaming “Forza.” It was attached to an Xbox controller and it was very cool, and I think maybe an important move for Xbox as mobile continues to disrupt the gaming space.

The final highlight from the briefing was the new Xbox Elite Wireless Controller Series 2. It’s the second iteration of the Xbox Elite wireless controller, and features more customization and longer battery life– 40 hours, according to Xbox. The Elite Series 2 will launch in some markets on November 4 for about $ 180 US, and it is available for preorder now.

Monday was a setup day, so there was nothing for me to do but capture footage outside of the convention center. But finally, Tuesday rolled around, and it was time for E3 to really jump off. First thing I did was play “Crash Team Racing,” which drops June 21 on Xbox One, the Switch, and PS4.

Well, the winner gets a swag bag. We’re playing on PlayStation 4. I then linked up with an Autoblog contributor, Carter Young. Carter has been coming to E3 since 1997, so it was awesome to have a veteran show me the ropes and even share in some of the filming duties. Carter and I walked the entire show in several hours. We did make quite a few stops, obviously.

We demoed an awesome driving rig from Next Level Gaming. The setup we tested retails for around $ 10,000 US and features a sliding motion that I’ve never seen anywhere else. It was a truly unique experience. We played “Monster Jam” and “Wreckfest.”

I’m at the “Monster Jam Steel” game booth here, and right next to me is the actual Grave Digger. And I just wanted to show you this for scale. I am like 5′ 10″, and the tire comes above my shoulder. This thing’s massive. It’s awesome.

We toured the Retro Video Museum. We saw some desktop cabinet games. In West Hall, Nintendo and Sega were showing off “Mario & Sonic Olympics.” But sadly, there was no “Sonic Racing” to be played.

Well, that’s it for now. I gotta go get some more Taco King before it’s time to fly back to Detroit. Head to autoblog.com for more E3 coverage, video, news, and be sure to follow us on Twitch. Thanks for watching.

Autoblog is a participant in the Amazon Services LLC Associates Program, an affiliate advertising program designed to provide a means for sites to earn advertising fees by advertising and linking to amazon.com. These deals are available through our affiliate partnership with Amazon.com. Deals are subject to Amazon’s schedule and availability.