The completely new 2020 Ford Explorer is on the way, which means there’s also a new police car version about to arrive at a precinct near you: the Ford Interceptor Utility. We won’t get to drive the civilian-spec Explorer until next month, but Ford just let us spend a couple minutes of seat time in the Interceptor.

Take note of what the new design looks like. It’s what you’ll be looking out for sitting in highway medians, and hopefully not what you’ll be seeing in your rearview mirror with lights ablaze. The few we got to check out and drive happened to be Hybrid-spec Interceptors, and they were designated as such with a “Hybrid” sticker package along the side. Cue the “I can outrun that; it’s a hybrid” jokes, but leave it as a joke, because it’s actually packing 318 horsepower and 322 pound-feet of torque courtesy a 3.3-liter naturally aspirated V6 paired with electric motor assist. In case anybody was wondering, it has a 137-mph top speed.

Unfortunately, the police Interceptor Utility we got to drive wasn’t outfitted with all the cool stuff one would expect to find on and in a police car. There were no lights, sirens, laptops or any of the other gear one might expect to be hiding within. Sigh. Anyway, we got to whip it around a short autocross course to get a sense of what this thing feels like in a “pursuit” scenario.

It silently pulls away before kicking on the gas engine when we floor it to enter the course. There’s less sound deadening in the Interceptor, which becomes noticeable right away as the raspy V6 buzzes away. The 10-speed transmission kicks down and we’re lightly shoved back in our seats. We wouldn’t call it fast, but it feels plenty quick to chase down the bad guys. What did surprise us was the massive braking power, which apparently comes from the same brake package found in the upcoming Explorer ST Track Pack. Press your foot down any more than just lightly tapping the brakes and the Interceptor positively hauls to a stop. There isn’t much modulation to it, but we’re sure Ford will tune things differently for the ST. 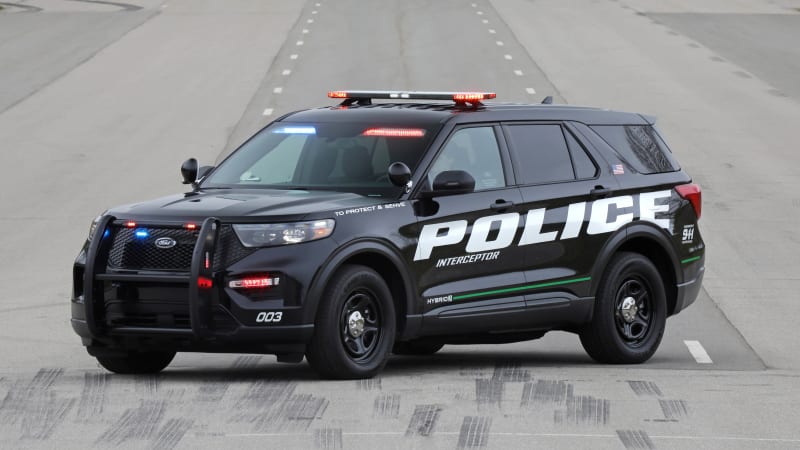 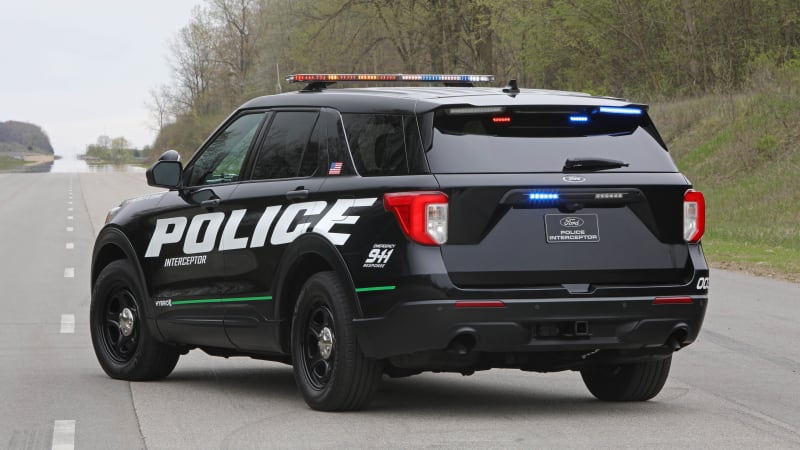 We weren’t able to judge the ride quality, as Ford had us on a flat expanse of pavement. Handling felt way better than the current Explorer out there, but we weren’t able to test the old Interceptor Utility back-to-back. This one rides on the Explorer’s new rear-drive-based platform also used by the 2020 Lincoln Aviator. There was no scrambling for grip (every Interceptor comes standard with all-wheel drive), and the bulk of the power going rearward was delightful versus a previous-generation front-wheel-drive Explorer.

The whole point of making an Interceptor Utility Hybrid is to save gas money, though. Police officers spend an extreme amount of time idling, and a hybrid allows the engine to be off for a good amount of that time. The Interceptor has a police-duty-rated hybrid system, which basically just means it has an extra cooling system for the battery. Ford claims that each car should save at least $ 3,500 a year on fuel costs compared to the old 3.7-liter V6, with that amount increasing as fuel prices increase. Assuming an average amount of electricity draw, Ford says police should expect the engine to run for about two minutes for every five minutes it spends off. This will deviate depending on the demand for electrical power in the car. It’s not final, but Ford estimates the Interceptor Utility will score an average of 24 mpg combined.

Interceptor police cars get a bunch of neat performance stuff reserved only for them. There are two pursuit modes: High speed pursuit and city pursuit. The modes are automatically selected based on the type of driving done by the officer. High speed pursuit focuses on charging the battery quickly and translating that electric energy into increased power, rather than saving it for later. The city pursuit mode tries to prioritize storing electric energy for more torque upon corner exit. Now that sounds like a badass hybrid.

The suspension is stiffer and able to handle a lot more abuse than any normal car, but this is typical for Interceptor-rated vehicles. It translates into solid handling from such a big and heavy vehicle. Ford says it’s faster in a straight line and around a racetrack than any police utility before it. Even the hybrid is quicker than the Chevrolet Tahoe-based police cars, but there was no mention of where it stands versus the Dodge Charger. 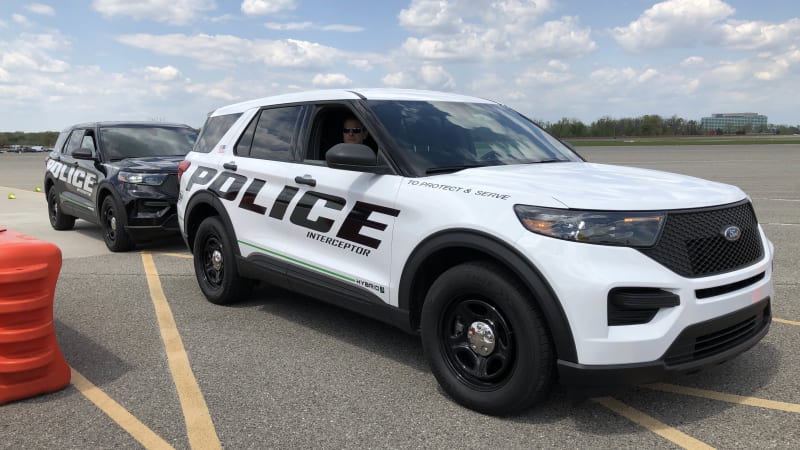 Just like a normal hybrid, the Interceptor Utility has the usual electric hum at low speeds to let the unaware know of its presence. The elimination of this sound seems like a perfect opportunity for police to try and be stealthy in situations that may call for it. However, Ford says it won’t defeat the system, so it’ll be up to the police to keep the sound-maker or not.

Ford told us it’s charging a $ 3,500 premium to police for the Hybrid over the non-hybrid 3.3-liter V6-spec Utility. If police do realize the gas savings Ford is saying they’ll get, the car should pay for itself in one year, and save the station money after that. As of now, Ford says approximately 1,100 of the 8,000 orders it has received for new Interceptors have been for the Hybrid model. They expect the Hybrid slice of the pie to increase even more as bigger cities like Los Angeles and Chicago get on board.

A hybrid police car makes all the sense in the world when you think about how police actually use their vehicles. This one has plenty of performance to go along with it, so we’re sure a ton of these more efficient cop cars will be patrolling your neighborhoods soon.