A couple of weeks ago, while shooting one of our weekly Facebook Live drives, we spotted a new Chevy Corvette ZR1 convertible out in the wild. We chased it for a mile or two before giving up pursuit. We’ve posted a number of spy shots on the site, but this was really the first time anyone had seen it in person. This past weekend, Senior Producer Christopher McGraw spotted another ZR1 prototype in the wild, along Gratiot Avenue. The video here is of far better quality, giving us one of our best looks yet.

Obviously, the biggest difference between the two is that this new one is a coupe. It’s also wearing a far more aggressive aero package, with a large rear wing and a carbon fiber front splitter and side skirts. Through the camouflage we can make out a number for details, most notably that massive hood. Whatever is hiding under there needs a bit of extra room up top. Unfortunately, the wind noise blocks any exhaust note. As we’ve seen before, the front bumper is entirely revised with a small center intake flanked by two massive ducts. 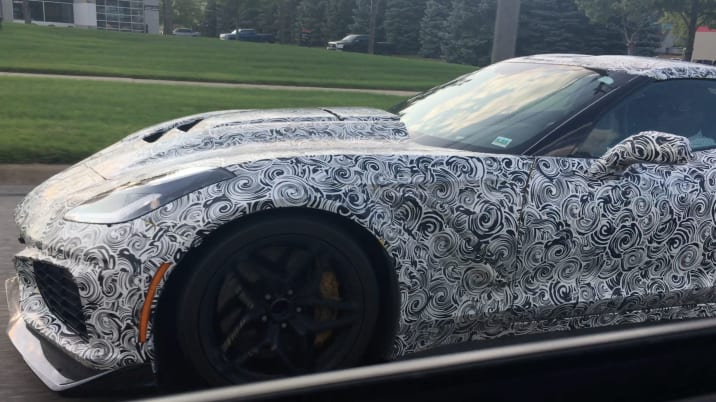 The brakes appear to be carbon ceramic, with calipers the size of your forearm. The front look like six-piston fixed units, while the rear uses fixed four-piston calipers. That’s the same as the current C7 Corvette Z06, and it’s difficult to say if anything is different. The wheels are of a new design, though they’re the same ones we’ve seen on other prototypes.

There’s still been no official statement from Chevy about this car, so we don’t yet know when it might make its debut. Development looks pretty far along, and clearly there are a number rolling around the greater Detroit area. In addition to the two we posted, Associate Editor Joel Stocksdale saw a third car, this one with uncamouflaged doors. Unfortunately, he didn’t get a chance to take a photo. We’ll keep you posted if we spot more.