The Rocket League RC Rivals Set is the perfect example of a solid idea held back by middling execution. The premise is simple: Take the smash-hit video game “Rocket League” and bring it from the screen to reality. While this Psyonix and Hot Wheels collab technically does that, there are so many unsatisfying quirks that it’s hard to tell if the toy is more fun than frustrating.

When we received the set at our office, I was ecstatic. I’ve been a “Rocket League” fan since its release all the way back in July 2015, and I couldn’t wait to see what Mattel had cooked up for this “real life” version of the game. I had already built up an idea of what I wanted the set to be in my mind, and perhaps that was the reason for some of my disappointment. 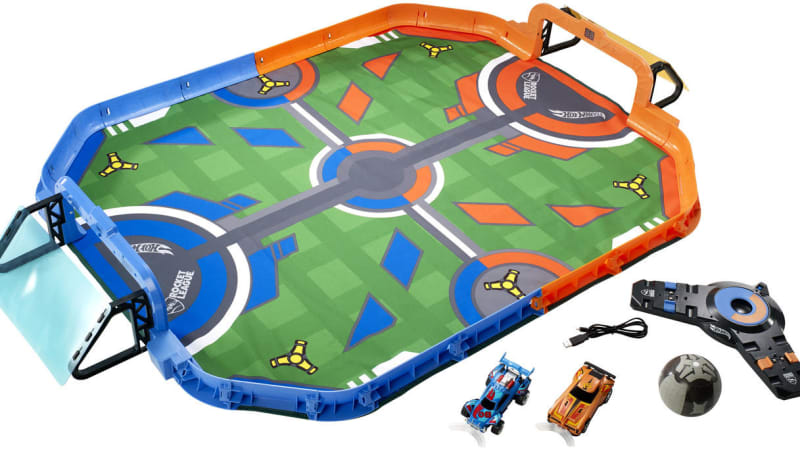 When I opened the box, I was immediately greeted by a set that was much larger than expected. Instead of the cars being the size of Hot Wheels, the real-life versions of the Dominus and Octane measure at about 5¼” long, bumper to bumper. On top of that, you have to attach a ball-pushing scoop to the front of the cars, which adds even more length.

After the initial surprise of the size, it was time to set up the arena. The instructions for the set come via the Rocket League RC Rivals Set mobile app, which can be downloaded through either the App Store or the Google Play Store. This part of the experience was well thought out, and the app looked and felt great through and through.

When you load up the app for the first time, you’re greeted with the build instructions for the arena. After you finish the instructions on the app, you’re brought to the main menu screen, which shares striking similarities to the home menu in the game. Not only were the main menu visuals basically identical, but the app even provides the driving Monstercat EDM soundtrack that “Rocket League” is known for.

Outside of the assembly instructions, the app is primarily used for controlling your vehicles and keeping score. Once your cars are charged up and turned on, they automatically show up in the app and you can select which car you’d like to control. I grabbed one of my coworkers, chose the Octane, my favorite car from the game, and was immediately underwhelmed by the directional controls once the game started.

The app gives you two options: You can either use direction control arrows, or a digital joystick. As you might expect, it’s tough to use any type of directional controls on a flat touchscreen, but if you’re a veteran “Rocket League” junkie, the issues are even worse. In the game, while using a controller, you accelerate with the trigger button on the right side and turn with the joystick on the left side, but the controls in the app for the Rivals Set are opposite. To control the RC cars, you go backward and forward with a control on the left side of your device and you turn right and left with a control on the right side. If you’re used to the video game, it’s like trying to learn how to write with your non-dominant hand.

On top of the controls being wonky, the handling was pretty atrocious for my tastes too. Similar to the game, the app allows you the option to “boost” and give your car some extra speed. I honestly don’t know who would ever elect to use this option, though, since the cars are already so fast and out of control that I found myself having to reach into the arena to get a vehicle unstuck on nearly every play. Cars got flipped over, stuck on the side of the arena, or caught underneath goals so often that it was impossible to find any kind of groove in the gameplay.

Goal scoring was a disappointment as well, with several of my compatriots correctly calling out the goals that were scored in our games as “cheap.” In the video game, the ball has to completely cross the goal line to register as a goal, but in the Rivals Set, the sensor is so close to the front of the goal line that if the ball rolls even slightly into the goal, it counts.

All of these issues were so frustrating that they outweighed the novelty for me in absolutely no time, and eventually all I wanted to do was go play actual “Rocket League.”

If the RC Rivals set were more affordable, it would be easier to overlook some of these issues, but at an astronomical $ 180 I was hoping for something a little more polished and fun. It’s great to see one of the best driving games of all time brought to life, but it’s obvious the RC Rivals Set would have benefited from a bit more time in development. A few of my gripes — the controls and vehicle speed — could probably be fixed with a software update, so here’s hoping Hot Wheels and Psyonix will consider making some changes. Until then, we’ll be streaming some “Rocket League” on YouTube and doing more driving game reviews this year, so if you’re into that sort of thing you can subscribe to our YouTube page. And if you still want to give the Rivals Set a try and you’ve got two bills absolutely burning a hole in your pocket, you can pick up a set right here on Amazon.